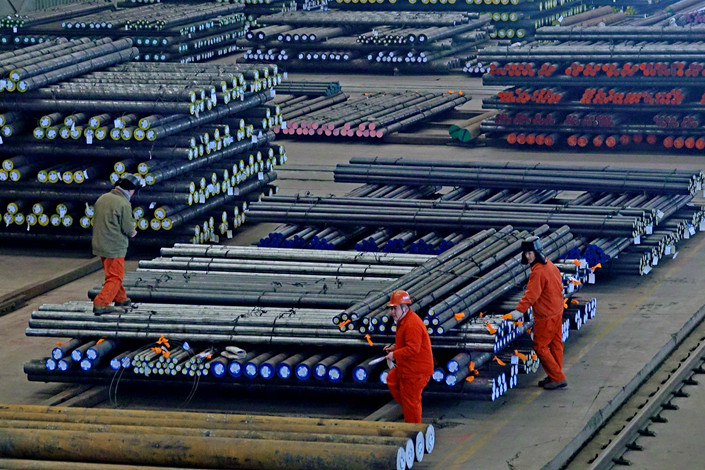 Workers prepare steel products for sale in the northeastern city of Dalian on Jan. 7. Photo: VCG

Activity in China’s vast manufacturing sector improved in February, recovering from a near three-year low the previous month as output and new orders expanded, although confidence over prospects for the year ahead edged down, a Caixin survey showed Friday.

The Caixin China General Manufacturing Purchasing Managers’ Index (PMI), which gives a snapshot of operating conditions in the manufacturing sector, rose to 49.9 in February, a whisker below the 50-point mark that divides expansion from contraction, from 48.3 in January.

The Caixin index, one of the earliest available monthly indicators showing the latest economic conditions in China, is closely watched by investors. The higher the reading is above 50 the faster the expansion, while the further below 50 the greater the contraction. The index has shown manufacturing to be in contraction for the past three months.

The improvement is “pointing to an easing of the economic downturn,” Zhong Zhengsheng, director of macroeconomic analysis at consultancy CEBM Group, a subsidiary of Caixin Insight Group, wrote in the report. “Domestic manufacturing demand improved significantly, and foreign demand was not deteriorating as quickly as last year,” he added.

“Overall, with the early issuances of local governments’ special-purpose bonds and targeted adjustments to monetary policy, the situation in the manufacturing sector recovered markedly in February due to the effect of increased infrastructure investment,” he said.

China’s new total social financing, a broad measure of credit and liquidity in the economy, was 4.64 trillion yuan ($690 billion) in January, the most since January 2002, as the central bank adopted an array of measures to bolster liquidity and tried to direct more lending into the real economy.

The central government has also encouraged more spending on infrastructure projects, allowing local governments to start selling bonds in January ahead of the normal annual schedule, which usually begins in April.

The PMI report showed output and new orders, two of the main subindexes, rebounded in February from below-50 readings in January. The gauge of output was at its highest in five months, while the new orders gauge rose above 50 for the first time in three months. The improvement though was driven by domestic demand with the gauge of new export orders falling back into contraction, although it was still the second-highest reading since March 2018.

Efforts to contain costs contributed to a further decline in employment and inventories, according to the survey. The subindex of employment remained in contraction while a gauge measuring stocks of finished goods sank to its lowest reading in almost three years. Falling commodity prices contributed to a decline in costs of raw material purchased, but manufacturers’ selling prices showed an expansion for the first time in four months.

The Caixin survey contrasts with the official manufacturing PMI released by the National Bureau of Statistics on Thursday, which dipped to 49.2 in February from 49.5 the previous month, the steepest contraction in three years.

The Caixin manufacturing PMI, sponsored by Caixin and compiled by data analytics firm IHS Markit Ltd., focuses on light industry, while the official survey focuses on heavy industry. The geographic distributions of the companies covered in the two surveys are also different.

The Caixin China General Services Business Activity Index for February, which tracks the growing services sector, will be released on Tuesday.