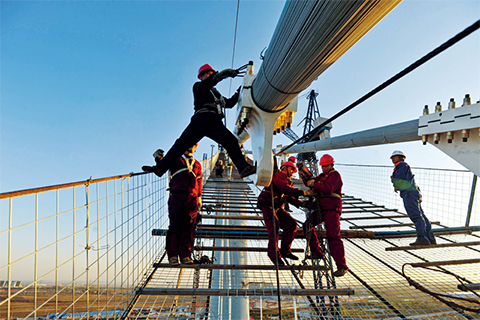 Chinese local governments are rushing to borrow funds for a new wave of infrastructure spending as part of a Beijing-backed initiative to bolster the cooling economy by authorizing bond sales months ahead of the normal annual schedule.

The governments of Xinjiang Uyghur Autonomous Region and Henan province were the first provinces to begin issuing local government debt under 2019 allocations. Beijing at the end of last year authorized the sale of 1.39 trillion yuan ($203 billion) of local government debt starting this month rather than in the second or third quarter as usual.

Central China’s Henan province on Tuesday started its plan to issue 16.5 billion yuan of general bonds, mainly for the construction of public welfare projects such as schools, and 28.8 billion yuan of special purpose bonds for projects including shantytown renovation, land acquisition, healthcare and light-rail projects.

In an unusual move in late December, the Standing Committee of the National People’s Congress (NPC), China’s top legislature, approved the 1.39 trillion yuan quota for new local government bond issuance in 2019 and cleared local authorities to start issuing debt in January. Local governments normally start bond issuance as early as April, and when liquidity is tight in the middle of the year, they delay bond issuance till July.

The NPC generally approves annual borrowing limits for local governments in March. The State Council, China’s cabinet, then orders the Ministry of Finance to assign quotas to local governments. Only after this can local authorities merge the bond quota into their fiscal budgets.

This year China wants to accelerate local government borrowing to fuel infrastructure investment as economic growth decelerates to the lowest rate in a decade.

China’s GDP grew 6.5% year on year in the third quarter, the slowest quarter of growth since 2009. A number of forecasters have cut their estimates of China’s 2019 growth to less than 6.5%, with the possibility that some quarterly growth could be less than 6%.