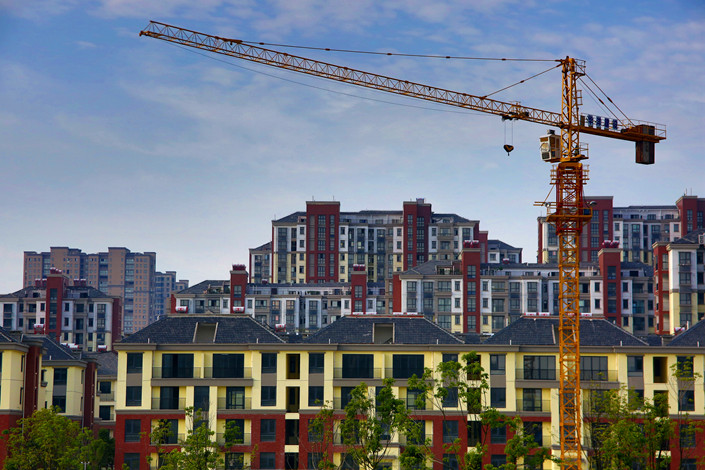 A construction crane towers over a residential development in East China’s Jiangsu province on May 11. Photo: IC

* The World Bank’s report forecast that the global economy would grow at a reduced rate of 2.9% next year

(Beijing) — The World Bank has lowered its forecast for China’s and the world’s economic growth in 2019, blaming softening trade and investment, trade tensions and a tightening financial environment.

China’s projected growth in 2019 was lowered by 0.1 percentage points to 6.2% in the development institution’s semi-annual report, published Tuesday, as headwinds are increasing amid continued trade tensions with the U.S. The report expects China’s economy to have grown by a “robust” 6.5% in 2018, helped by strong consumer spending, although this would also be the weakest pace in nearly three decades.

While recent and coming fiscal and monetary support in China will likely offset most of the negative impact of the trade war, they could also delay important efforts to reduce debt and crack down on financial risks in the country, the report said, which would be “undesirable.” The government has recently cut the amount of cash banks have to hold in reserve for the fifth time in 12 months, and accelerated local government bond issuance to spur infrastructure spending, among other measures.

China’s sweeping campaign to cut down on financial risks has eviscerated its shadow banking industry and made it much harder for many firms to access credit, especially those in the private sector. Echoing similar sentiment from the International Monetary Fund last year, the World Bank report showed concern that this campaign could be rolled back to safeguard growth, creating greater risks in the long term.

The report noted in particular the high level and growth of private debt in China, cautioning that previous credit booms in other emerging economies that had lower levels of private debt ended with significant growth slowdowns or financial crises. China’s large foreign exchange reserves, capital controls and low central government debt help reduce these risks, however, it said.

The key challenge for China is to move to a more sustainable growth model while under extra pressure from trade-related headwinds, said the report, which cautioned that the country should not overstimulate the economy. The report recommended strengthening intellectual property rights to boost innovation while also reducing trade frictions with the U.S.

The Trump administration has slapped escalating rounds of tariffs on nearly half of China’s exports to the U.S., pressing Beijing to close trade gaps, end alleged intellectual property theft, widen market access and roll back state-backed industrial development policies. Beijing has struck back with similar tariffs on America goods. Damage from the trade war has become increasingly visible in China. Analysts predicted that China’s export growth will decline from 11% in 2018 to 5.6% in 2019.

Though the World Bank report welcomed a recent apparent thaw in U.S.-China relations and the delay of a tariff hike originally due on Jan. 1, it cautioned that the risk of rising trade protectionism “remains high.” Negotiators from the two countries agreed to extend talks earlier this week.

If all proposed tariffs were implemented along with likely retaliatory actions, then U.S.-China trade could be substantially affected, the report said, with growth in both countries slowing as a result. Combined with the likely negative effects this would have on investor confidence, this scenario could see global exports reduced by up to 3% and global income by 1.7% in the medium term, it said.

The report did not alter its previous forecasts for growth in 2019 in the U.S. or advanced economies as a whole, which were 2.5% and 2.0% respectively.

Other risks to global growth highlighted in the report include policy uncertainty caused by “idiosyncratic developments” such as Brexit, the increasing prevalence of extreme weather events, and higher-than-average numbers of armed conflicts, particularly in sub-Saharan and North Africa and the Middle East.