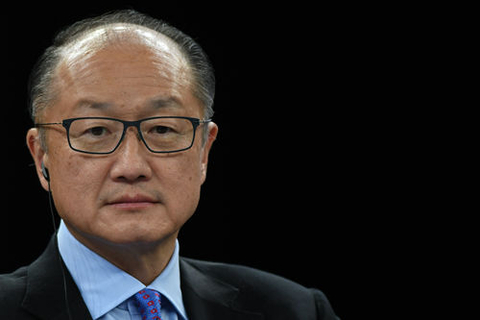 Kim, 59, has been a staunch ally in China’s development and has held up the World Bank’s collaboration with China as a model for cooperation with other developing-country partners. He is also a supporter of China’s “Belt and Road” initiative.

Kim’s resignation will leave the position open for U.S. President Donald Trump to fill, but he may have to battle other countries over the succession of the head of the international financial institution. Developing nations have become resistant to the tradition of filling the post with an American nominee.

“The work of the World Bank Group is more important now than ever as the aspirations of the poor rise all over the world, and problems like climate change, pandemics, famine and refugees continue to grow in both their scale and complexity,” Kim said in a statement.

“Serving as president and helping position the institution squarely in the middle of all these challenges has been a great privilege.”

The chance to join the private sector was “unexpected,” he said in an email to World Bank colleagues. But the new role will be crucial for battling global issues such as climate change and inadequate infrastructure in emerging markets, he said.

The World Bank provides loans to countries for capital projects. It’s been a long-standing practice that the U.S. names the institution’s president. But in recent years, other countries — particularly developing ones — have increasingly called for the end of America’s control over the multilateral institution.

President Barack Obama’s appointment of Kim in 2012 prompted a backlash from countries such as Nigeria and Colombia. They argued that a developmental financial institution should have people from developing countries in leadership positions and that the practice of Americans leading the World Bank and Europeans the International Monetary Fund was “outdated.”

The U.S. is the World Bank’s largest shareholder, with 16% of voting rights. Trump has repeatedly expressed disdain for multilateral institutions like the World Bank, complaining that the U.S. has loaned too much money to China, which is “not a developing country anymore.” Trump has also said the World Bank’s employee compensation is too generous. However, the U.S. Treasury Department still supported a $13 billion World Bank capital increase in 2018.

The White House has yet to comment on Kim’s departure and succession.

Kim is the 12th president of the World Bank since its establishment in 1944. Holding dual nationality of the United States and South Korea, he is the first Asian president of the institution. Kim was unanimously re-elected by the board for a second five-year term in 2016.

During Kim’s tenure, the World Bank also completed two rounds of financing for the International Development Association, which is part of the World Bank.

Kim was born in Seoul in 1959 to two North Korean defectors. The family moved to the U.S. when he was five. His father is a dentist, and his mother holds a Ph.D. in Confucianism from an American university. Kim said his parents, one idealist and the other pragmatist, have influenced his life trajectory.

Before his World Bank career, Kim served as the president of Dartmouth College from 2009 to 2012. Kim had previously worked for the World Health Organization and taught at Harvard Medical School. He also held positions at the Harvard School of Public Health and Brigham and Women's Hospital in Boston. In 1987, Kim co-founded the nonprofit “Partners in Health,” which works in underdeveloped communities on four continents.

Unlike his 11 predecessors, Kim had not held senior government positions, nor had he managed large companies or financial institutions. He came to the World Bank with more than 20 years of experience in international development and poverty alleviation, as well as an understanding of science and social disciplines, which he said enabled him to adapt to, understand and lead the World Bank.

According to the World Bank's annual report, under Kim the institution’s funding for developing countries increased from $52.6 billion to nearly $64 billion from fiscal year 2013 to 2018. While continuously improving the institution’s fundamental borrowing capacity, Kim has also been trying to reposition the Word Bank.

Kim has repeatedly said in interviews that the World Bank's biggest function is not how much money it can provide, but the experience that comes with the money and the involvement of past beneficiaries.

Over the past seven years, the World Bank has faced competition from new multinational institutions, such as the Asian Infrastructure Investment Bank (AIIB). While welcoming the likes of the AIIB in increasing global infrastructure investment, Kim in 2014 slashed staff, reduced costs and increased operational efficiency within his own organization. It was the World Bank's first major reform since 1996.

In 2013, Kim helped set the World Bank’s major missions: First, eliminate global extreme poverty by 2030 and reduce the overall population of extreme poverty to less than 3% of the world’s population. Second, shift the policy focus to the income growth of the world's poorest 40% from average economic growth.

Kim argues that one of the key means of eliminating poverty is to invest in infrastructure. The World Bank itself has also affirmed the positive role of infrastructure in improving the economic structure and promoting economic prosperity.

In the year that Kim proposed to eradicate global extreme poverty, the World Bank's World Development Indicators report showed that the countries and regions with the world's poorest populations were Sub-Saharan Africa, India and China.

According to the report, China has become an exemplary country in poverty reduction. The percentage of China’s extremely poor has dropped significantly to 13% from 1981’s 43%, owing to the improvement of its economic growth model to bolster domestic demand and infrastructure investment.

Kim has overseen cooperation between the World Bank and China in infrastructure financing. In 2013, then governor of the People's Bank of China Zhou Xiaochuan and Kim signed a memorandum of understanding on co-financing cooperation in Beijing.

China became the first partner of the International Finance Corporation's new “Funding Mobilization Plan.” IFC is an international financial institution that offers investment, advisory and asset-management services to developing countries and a member of the World Bank Group.