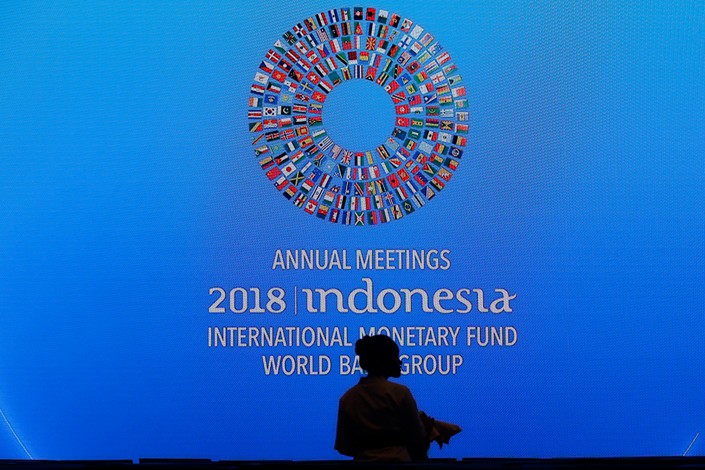 A banner from the annual joint meetings of the International Monetary Fund and World Bank is seen in a conference room in Bali, Indonesia, on Monday. Photo: IC

China is in danger of stoking risks to the country’s financial stability as policies to avert a growth slowdown amid trade tensions with the U.S. undercut efforts to reduce threats to the economy stemming from high leverage, the International Monetary Fund (IMF) said in a report released Wednesday.

Regulatory tightening has slowed the buildup of risks in China’s financial sector and made it harder for weaker borrowers to obtain credit, the IMF said in its semiannual “Global Financial Stability Report,” pointing to a surge in corporate bond defaults in 2017 and 2018. These policies have contributed to a slowdown in economic growth, which is happening just as trade tensions with the U.S. are starting to bite.

In response, authorities have implemented measures to support growth via monetary easing and watering down the implementation of more-stringent regulations aimed at reducing risks in the financial system. The IMF report warned that these efforts could undermine the de-risking agenda and “entail greater risks to financial stability over the medium term should they set back progress toward reducing financial vulnerabilities.”

“The balancing act here essentially is to consider what the appropriate measures are to sustain growth in the short term without contributing to a further buildup of vulnerabilities that could have financial stability implications in the medium term,” Fabio Natalucci, deputy director of the IMF’s monetary and capital markets department, said at a briefing on the report in Bali, Indonesia, where the fund and the World Bank are holding their annual meetings.

With weakening growth and uncertainties over trade, smoothing the economic impact of structural adjustments and de-risking “is a very difficult act of judgment that policymakers in China have to struggle with,” Vitor Gaspar, director of the IMF’s fiscal affairs department, told reporters at a separate briefing on its Fiscal Monitor, a report that tracks the state of countries’ public finances.

Over the last few months, the Chinese government has urged banks to lend more and called on local governments to speed up bond issuance to raise funds for infrastructure spending. Regulators have also provided financial institutions with more leeway in complying with new rules aimed at curbing “shadow banking” and bringing the unwieldy asset management industry under control.

In August, for example, regulators told trust companies that they will be allowed to conduct some kinds of channeling business if it served the real economy, easing a crackdown on an opaque activity that makes it hard for regulators to monitor who is actually borrowing money, and enables banks to hide the additional risks they’re exposed to.

The People’s Bank of China (PBOC) has lowered the amount of money banks must set aside as reserves, known as the reserve requirement ratio, four times this year to ensure adequate liquidity in the financial system to support the economy. The latest cut, announced on Sunday, will release a net 750 billion yuan ($108 billion) of liquidity into the banking system — money the PBOC said could help boost credit to small businesses, privately owned enterprises and innovating companies.

The IMF warned that while China has made some progress in containing leverage, debt is still too high. “China’s non-financial corporate sector leverage has been rising and is currently well above global historical benchmarks,” the report noted. “The rapid pace of growth in household debt, which is now at the high end for emerging markets, also raises concerns.” The report showed household debt to GDP in China has more than doubled over the past decade to just under 50%, while that of other emerging market economies has remained relatively stable at just under 20%.

So far, the impact of the trade war between China and the U.S. has been contained to the two countries, but if it escalates, it could affect global financial stability, the IMF said. Global economic expansion remains strong, but the trade war could potentially shock investor confidence, with “significant adverse consequences” for global macroeconomic activity, Tobias Adrian, IMF monetary and capital markets department director, told reporters.

On Tuesday, the IMF lowered its 2019 projection for global economic growth, and for China and the U.S., due to rising trade barriers and greater policy uncertainty. The IMF estimated that the global economy will grow 3.7% in 2019, down from its July projection of 3.9%, the first time since July 2016 that the fund has downgraded its global growth forecast.