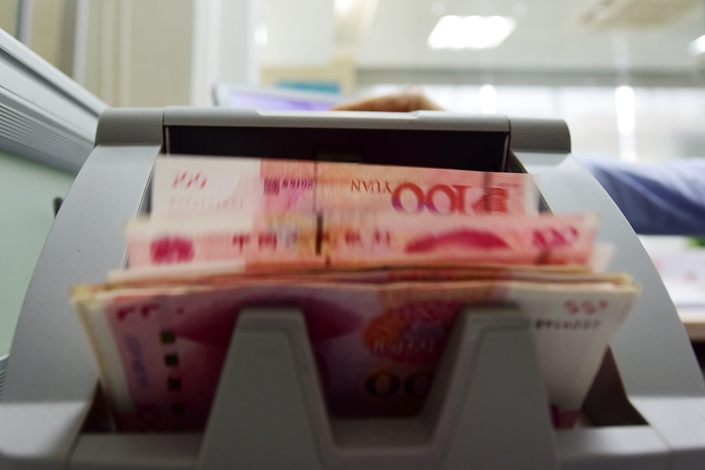 “Local governments are all under water. No one wants to be the first to show it can’t hold its breath,” a source who investigated the situation in localities told Caixin. Photo: VCG

*Though defaults are increasing as a consequence of the government’s deleveraging campaign, the number and value are not yet considered high — the rate is also lower than it was in 2016

*Most defaults so far have been in industries including traditional manufacturing and port management, but analysts expect to see defaults in the real estate and local government financing sectors later in the year

(Beijing) — Regulators are holding fast to their campaign to reduce leverage in the economy despite the growing pain in the bond market.

Authorities will unswervingly implement deleveraging regulations for some time, a source close to regulators told Caixin. Defaults are a common occurrence, and are the process by which financial risk dissipates.

The regulator’s commitment can be seen in the rising number of corporate bond defaults. From January to early June, 13 companies defaulted on 14.2 billion yuan ($2.19 billion) (link in Chinese) in corporate debt, already more than half the value of defaults over all of 2017, according to a report from China Central Depository & Clearing Co. Ltd., known as China Bond, the official source for domestic bond market data. Of the 13 companies, six defaulted for the first time.

Since a draft of rules for the asset management industry was released in November, financing through “shadow banking” channels has fallen off, and private enterprises, which find it harder to obtain financing than their state-owned peers, were hit hardest.

Listed companies have also faced a barrage of restrictions on refinancing since 2017, including on private placements and limits of the sizes of stakes that major shareholders can sell. In January, regulators told companies they must cap the amount of money they borrow by pledging shares as collateral at 60% of the market value of the pledged shares.

Breaking the implicit guarantee — the perception that the government will bail out companies — in an orderly way helps to redefine the market’s credit risk premium and is the only way forward for the bond market’s healthy development, according to a recent research note from China International Capital Corp. Ltd. (CICC). The number and value of the defaults are not considered high at the moment. However, if the number of defaults continues to grow, the cost of corporate financing could jump, creating credit risk from suboptimal liquidity in the corporate bond market.

Backing away from bonds

On May 21, Beijing Orient Landscape & Environment Co. Ltd. held a planned 1 billion yuan bond issuance in which it managed to raise only 50 million yuan. Over the next five trading days, it shares fell 23%. Beijing Orient then sought a temporary halt in trading, citing major asset restructuring.

Among those that canceled or rescheduled their issuances, most were private companies rated AA+, AA or A, indicating in a lack of confidence in any company without an immaculate credit rating or explicit government backing.

“We currently don’t buy anything other than certificates of deposit, government bonds, debt from AAA-rated state-owned enterprises,” an employee from a financial affairs firm serving a major private corporation told Caixin.

At the start of June, the central government tried to give a boost to financing for smaller firms by broadening the kinds of collateral it accepts for its medium-term lending facility (MLF). The PBOC added AA-grade-and-above small-and-micro enterprise bonds, green bonds and agriculture-related financial bonds; plus AA+ and AA corporate credit bonds; and high-quality small and micro-enterprise loans and green loans as collateral for MLF.

“The central bank wants to tell everyone that it’s safe to buy AA bonds, but this doesn't mean much,” the source from the financial affairs company told Caixin. Many institutions are simply saying they won’t buy anything below AAA, the source said, adding that this was especially true at state-owned enterprises, where everyone is afraid of shouldering the responsibility of making a bad investment. “If there is a default, those people above and below you can be implicated,” the person said.

Paying for the past

The credit boom is in part due to competition between different regulatory bodies including the China Securities Regulatory Commission (CSRC), the National Development and Reform Commission (NDRC) and the National Association of Financial Market Institutional Investors (NAFMII), a self-regulatory body under the central bank, to have more control over the market, according to a banking source that used to be on the NAFMII’s bond market committee.

In January 2015, the CSRC expanded the types of companies that could issue bonds on the exchanges to nonlisted companies. It also simplified audit procedures. As a result, exchange-traded bonds saw a dramatic increase in 2015, while those issued in the interbank market dropped by 49%.

The NDRC, which oversees bond issuance by some quasi-sovereign entities such as policy banks, soon followed with its own revised rules in December 2015, which also simplified audit procedures for companies to issue debt. The NAFMII issued a number of revised regulations in February 2016 that made the registration and issuance process for corporate bonds much faster.

According to data from Wind Information, 1,955 corporate bonds valued at 2.06 trillion yuan will come due this year, an increase of 10% from 2017.

“We had thought that loans made up too high a proportion of all financing, so we encouraged direct financing and the development of the corporate bond market. But actually, we realize now that many companies did not make the necessary preparations,” said Zhao Yi, vice director of the fixed income department of Generali China Asset Management Co. Ltd.

So far this year, private firms that have defaulted were in industries including traditional manufacturing, environmental protection and port management. “In the second half of this year, expect real estate and local government financing platforms to default,” an asset management professional at a major bank told Caixin.

Although no real estate enterprise has defaulted on its publically issued bonds, they have had trouble issuing new bonds. Data from Shenzhen and Shanghai stock exchanges show that from May to early June, there were six real estate firms that suspended plans to issue 45 billion yuan in total debt.

“Local governments are all under water. No one wants to be the first to show it can’t hold its breath,” a source who investigated the situation in localities told Caixin. “They would rather stop projects, withhold pay, stop previously agreed upon payments, so they can repay debt — and even take out loans at high interest rates to repay previous loans. But this cannot go on forever.”