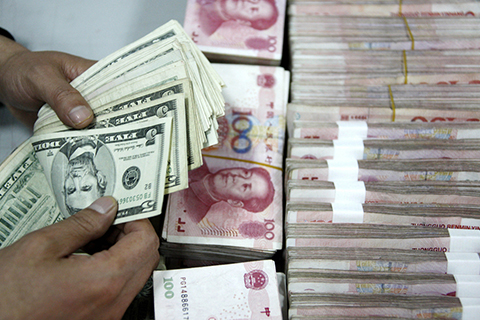 China Energy Reserve has $1.8 billion of offshore debts outstanding, which will be affected by cross-default provisions. Photo: IC

* China Energy Reserve has $1.8 billion of offshore debts outstanding, which will be affected by cross-default provisions

* As it pursued overseas investment and bond sales, China Energy Reserve identified itself as a major state-owned company with central government backing

A Chinese energy conglomerate became the latest to rock financial markets after it defaulted on $350 million in offshore bonds, underscoring the pressures choking debt-driven companies amid China’s deleveraging campaign.

Beijing-based China Energy Reserve and Chemicals Group said in a Sunday regulatory filing that a subsidiary failed to repay $350 million of three-year dollar bonds that matured May 11. The incident fanned fears of further default risk for U.S. dollar debt and drew investors’ attention to the defaulter’s opaque ownership.

The missed payment triggered cross defaults of other debt securities, including two Hong Kong dollar bonds that were due to mature in 2021 and 2022. Bloomberg data showed that China Energy Reserve has $1.8 billion of offshore debts outstanding, which will be affected by cross-default provisions. Underwriters of the bonds include Barclays Bank, Bank of Communications, Wing Lung Bank and CLSA Securities, according to company filings.

In the Sunday filing, China Energy Reserve cited “tightening credit conditions over the past two years,” which restricted its access to financing channels such as bank loans and onshore bond sales.

China Energy Reserve led an investor consortium in November to offer a record $5.2 billion for Hong Kong’s fifth-tallest skyscraper, The Center. The same month, the company launched a $348 million hostile takeover for Australian energy firm AWE Ltd. But the company later backed out of both deals amid concerns over funding issues and tighter regulatory scrutiny of overseas investment.

As it pursued overseas investment and bond sales, China Energy Reserve identified itself as a major state-owned company with central government backing. But little information about the company’s shareholding and financials are available publicly, and its ownership and management have remained opaque.

On its website, China Energy Reserve describes itself as a “large-scale capital and industrial conglomerate” established in 2010 with businesses principally in the oil-and-gas industry. In response to questions from Caixin Monday, Wang Jinzhou, China Energy Reserve’s deputy general manager, said the company is backed by the state, without elaborating.

In information released at the end of 2017, China Energy Reserve said it operated 1,100 kilometers (684 miles) of natural gas pipeline in China as of September as well as 300 liquefied natural gas storage facilities and more than 100 gas stations.

China Energy Reserve said increasing cash flow and capital requirements “have resulted in a liquidity crunch,” according to its May 27 filing in Hong Kong. The company said it will continue business operations while working to divest assets to alleviate the capital pressure.

But in the interview with Caixin, China Energy Reserve’s Wang denied that Zhongyou Sanhuan is a shareholder of the company.

Most of the shareholders’ identities remain opaque as well. China Fulaide, which invested in China Energy Reserve in 2013 according to the document, has no publicly available business registration record. China Energy Reserve in a 2015 bond issuance document said China Fulaide was 25% owned by the Beijing Municipal Commerce Bureau, a city government department that was scrapped in 2009.

Another of the listed shareholders, China Overseas Holdings, said on its website that it is a central-government-owned company engaged in construction, technology, finance and cultural business. But the company’s name is not on the list of central-government-owned companies supervised by the State-Owned Assets Supervision and Administration Commission, according to Caixin’s research.

One of the closest affiliates of China Energy Reserve is Shenzhen-listed Jinhong Holding, a Beijing-based natural gas distributor, based on information provided by Qixinbao, a business registration data provider. The two companies have made joint investments in a number of companies, according to Qixinbao. Jinhong’s largest shareholder, Xinneng International Investment Co., held a 25% stake in China Energy Reserve until it sold the stake to China Overseas Holdings in 2015, according to Qixinbao.

Meanwhile, one of Jinhong’s founders, Sino-Petro New Energy Group, is 79% owned by China Energy Reserve and its subsidiaries, according to business registration records.

In a May 17 filing with the Shenzhen exchange, Jinhong said it is an affiliate of China Energy Reserve but said the companies have no equity relationship.

But also on May 17, China Energy Reserve said it replaced Chen as its legal representative with a person named Zhu Ning.

Jinhong’s clarification came as its bond and stock prices tumbled on news of China Energy Reserve’s default. Trading of 800 million yuan of Jinhong bonds was suspended May 17.

Huang Kaixi and Liu Xiao contributed to the report.