Deleveraging Must Consider What Market Can Bear: Official 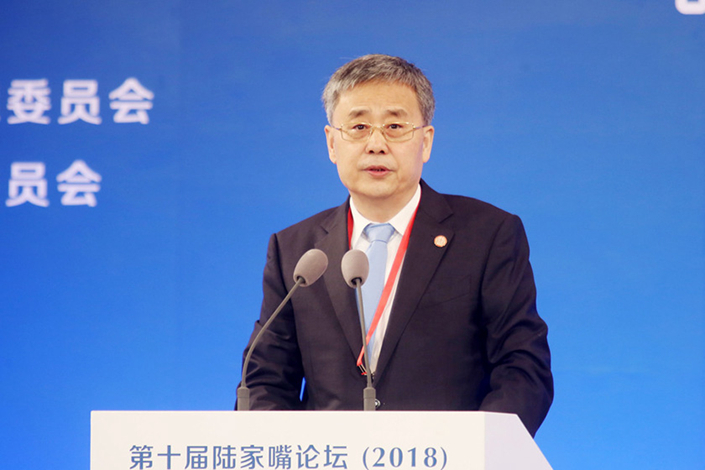 Guo Shuqing, chairman of the China Banking and Insurance Regulatory Commission, speaks at the Lujiazui Forum in Shanghai on June 14. Photo: IC

China’s financial deleveraging campaign must consider the ability of financial institutions and the market to absorb the impact of tightening policies, and the illusion of any potential government bailout must be shattered, China’s top banking and insurance regulator said Thursday.

China Banking and Insurance Regulatory Commission (CBIRC) Chairman Guo Shuqing made his comments as analyst expectations rise that the government may relax its hard-line stance on deleveraging amid growing signs of cooling in the world’s second-largest economy.

“The crackdown on interconnected businesses and the recycling (of money) within the financial sector must fully consider the ability of institutions and the market to withstand” such pressures, said Guo at a forum in Shanghai, referring to some of the tricks financial institutions use to hide their lending from regulators.

Guo also indicated that local authorities, banks and enterprises can no longer assume the central government will bail them out when borrowers run into difficulties repaying debts, an assumption of many due to Beijing’s traditional concerns about maintaining social stability.

One of policymakers’ priorities will be to “establish and improve a mechanism in which enterprises, banks and governments share responsibility and losses,” he said.

The government has embarked on a campaign to rein in off-balance-sheet activities such as “shadow banking,” which have thrived outside of regulatory oversight and have led financial institutions to exploit regulatory gaps to invest in each other’s products, creating opaque and complicated webs of interconnected investments. Such measures have squeezed the supply of credit and caused borrowing costs to rise. Total social financing, China’s broadest measure of credit, posted its smallest monthly total since July 2016 in May due to significant declines in shadow banking instruments such as trust loans, entrusted loans and undiscounted bankers’ acceptances.

A wave of failed debt repayments made news headlines in recent months, and investor anxiety is growing that more companies will default on their debt due to borrowers’ declining refinancing ability in a market with tightening liquidity.

Signs of a slowdown in China’s economic growth have also emerged as the expansion in investment, industrial output and consumption all moderated last month. The investment in infrastructure construction, which is driven by local government spending, hit a new all-time low in May, as the financial deleveraging campaign limited local government financing vehicles’ access to debt. The country’s ongoing trade spat with the United States is also adding uncertainties to China’s growth prospects.

Many analysts are expecting the government to slow its push to deleverage the financial sector to avoid a precipitous drop in economic growth or a credit crisis.

The People’s Bank of China did not follow the U.S. Federal Reserve’s interest rate hike with one of its own on Thursday, which has been regarded by some economists as an evidence of policy easing.

“Faced with a domestic slowdown that has been worse than expected and the potential fallout of a trade war, Beijing has already chosen to soften its stance on deleveraging and has introduced moderate policy easing measures,” Lu Ting, chief China economist with Nomura International, wrote in a note Thursday.

Louis Kuijs, head of Asia economics with research firm Oxford Economics, said in a report that although the government was unlikely to back away from reining in credit growth and financial risks, they may still “want to keep the policy stance flexible and ease further if that is deemed necessary, to ensure credit growth slows down only gradually and the impact on GDP growth is contained.”