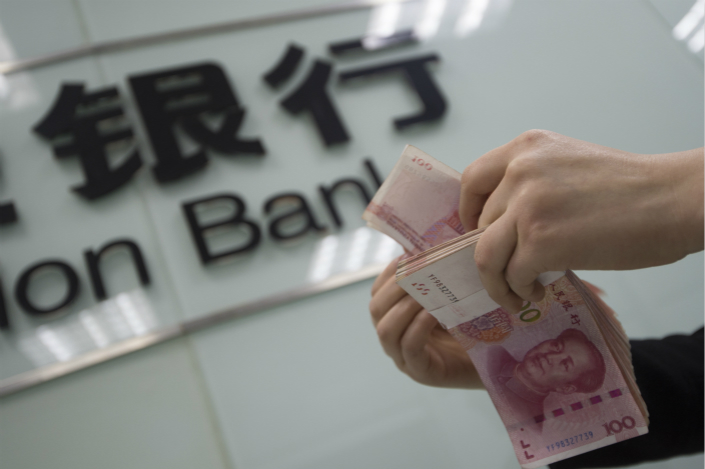 While the country's big four state-owned banks have been rigorously defining loans as non-performing, smaller lenders including city and rural commercial banks have been far less stringent. Photo: VCG

Regulators are putting pressure on banks to be more rigorous in classifying their nonperforming loans (NPLs) as the authorities step up efforts to make China’s lenders come clean about the extent of their bad debts.

The local regulator in the eastern province where his bank is located is requesting compliance by the end of 2018, he said. “This was a verbal request, there was no written document,” he said.

The commission has not announced the deadline publicly, but has given window guidance to banks, sources told Caixin.

The NPL ratio of Chinese commercial banks stood at 1.74% of total loans at the end of March, unchanged for the fifth straight quarter, although the amount of outstanding bad loans has risen to 1.71 trillion yuan from 1.51 trillion yuan at the end of 2016, data from the CBIRC show.

However, many analysts, including those at ratings companies, the International Monetary Fund, and even China’s central bank say that the true level of NPLs is far higher. Lenders have taken a variety of measures to hide the scale of their bad debts partly to avoid making the required provisions to cushion the impact nonpayment of loans could have on their balance sheets and partly to avoid getting into trouble with regulators for risky lending.

Although Chinese banks have had to use the standard international five-category loan classification system for more than a decade, the rules do not specify how long after they become overdue that loans need to be classed as nonperforming, giving banks a lot of leeway in deciding when a loan turns bad.

“Historically, there has been a weak correlation between NPLs and loans overdue by more than 90 days,” the city commercial bank employee said. “But in the future regulators want to make this correlation much stronger.”

The lack of transparency by the banks, especially smaller lenders, has made it difficult for policymakers to get an accurate picture of just how bad the nonperforming-loan problem is in China and how big a risk it poses to the stability of the financial system. Forcing banks to be more stringent in classifying their bad debts could help reveal the ugly truth and compel them to tackle the problem.

Small and midsize banks in particular are very loose with their classification of NPLs, an employee in the risk management department of the provincial branch of a major state-owned bank told Caixin. If these guidelines are implemented to the letter, many of these institutions will be forced to reveal a rapid increase in their NPL ratios, he said.

Most of China’s larger banks are already classifying loans more than 90 days overdue as nonperforming. An employee in the risk management department of the provincial branch of a major state-owned bank said they already classify all loans more than 90 days overdue as NPLs. “Our bank has always used automatic classification, especially with retail loans and small- and micro-size loans,” the person said.

A Caixin analysis of information contained in 2017 annual reports shows that the NPL classification standards of China Construction Bank, one of the big four state-owned commercial banks, are the most rigorous — loans overdue by more than 90 days were 58.5% of its total NPLs. The other three banks –– ICBC, Bank of China and Agricultural Bank of China –– all reported that total NPLs were bigger than loans overdue by more than 90 days.

However, Bank of Communications and joint-stock banks including Ping An Bank and Minsheng Bank, who have more relaxed classifications, reported their 90-day overdue loans were far higher than their total NPLs (Ping An’s 90-day overdue loans balance was 43% higher than its total NPLs), indicating that the banks are not classifying all their loans overdue by more than 90 days as bad debts.

City and rural commercial banks appear to have the least stringent classification for NPLs. Hong Kong-listed Zhongyuan Bank and Bank of Zhengzhou reported loans overdue by more than 90 days amounted to 221% and 171% of their current total bad debts.

Stricter recognition of nonperforming loans will affect banks’ profits because they have to set aside part of their earnings, in a range specified by regulators, as a cushion to protect their balance sheets from the impact of bad debts. The higher the number of NPLs, the higher the provisions they need to make.

The CBIRC has already recognized the negative impact this could have on bank profits and in March said it would allow lenders to lower the amount of cash they need to set aside to cover losses from bad loans, provided they meet certain criteria, including their willingness to classify more lending as bad debt and/or to actively write off new nonperforming loans.

Banks that fulfill those conditions can reduce their loan-loss provisions to as low as 120% from 150% of their bad loans and reduce the minimum ratio of provision to total loans to 1.5% from 2.5%.