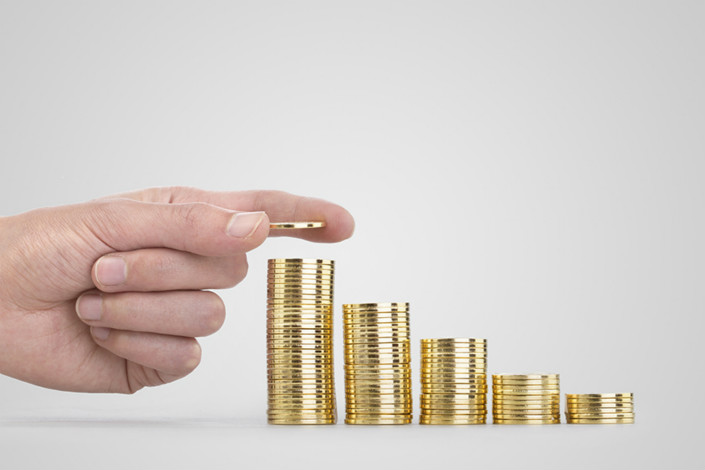 Guo Mingjie, vice president of GI Technologies Group, said prices of nonperforming-loan packages will likely peak in June and drop 20% to 30% overall from 2017 levels by the end of 2018. Photo: VCG

More packages of bad loans are expected to flow into the market and push prices down this year, a number of industry insiders have told Caixin.

The four national asset management companies (AMCs) will need to speed up their disposal of bad loans and may choose to sell some in bulk, Jinzhuo Asset Management Co. Chairman Liu Lü said at an industry conference on Thursday.

In addition, regulators have been pushing banks to better recognize and speed up the disposal of nonperforming loans (NPLs). To encourage this, the banking regulator said in February that banks would qualify for lower reserve coverage ratios if they classified as bad loans a higher proportions of loans that are overdue by 90 days, and if they were more proactive in disposing of NPLs. A bank’s reserve coverage ratio is a measure of how much money it has to set aside to cover potential losses.

Under the new regulatory environment, Shanghai’s banks will likely double or triple the number of NPL packages they offer this year compared to 2017, said Sun Tao, CEO of Shanghai Ruiyinshengjia Asset Management Co.

NPL packages were irrationally priced last year, in part because many new funds brought chaos into the market, said Guo Mingjie, vice president of GI Technologies Group, which invests in NPLs. Prices of NPL packages will likely peak in June and drop 20% to 30% overall from 2017 levels by the end of 2018, he predicted.

Starting in 2012, when both the amount and ratio of commercial banks’ NPLs started to rise, many players crowded into the space, driving up prices. It was not uncommon to see bad-debt packages sold for 0.6 yuan (9.5 U.S. cents) to 0.7 yuan per yuan of loans, compared with 0.1 yuan to 0.2 yuan at the turn of the century, when China’s four national AMCs were formed.

While the number of packaged NPLs sold off by banks continued to increase during the first quarter of 2018, the rate of transactions and the price of packages have both dropped, suggesting that investors are becoming more rational, Zhang said during a news conference earlier this month.

Amid tighter regulations and more-stringent risk-management practices, the cost of making a bad lending decision has become higher, and the market should not see another surge in bad debt in the coming years, as it did in 2013, said Weng Tao, a partner in the financial services practice with Oliver Wyman’s Greater China team.

“Whether or not we will see commercial banks’ nonperforming loan levels remain stable will depend on how quickly and effectively banks can adjust lending to growth industries in the consumption sector,” Weng said.

This story has been updated to elaborate on the capital adequacy ratios for AMCs.