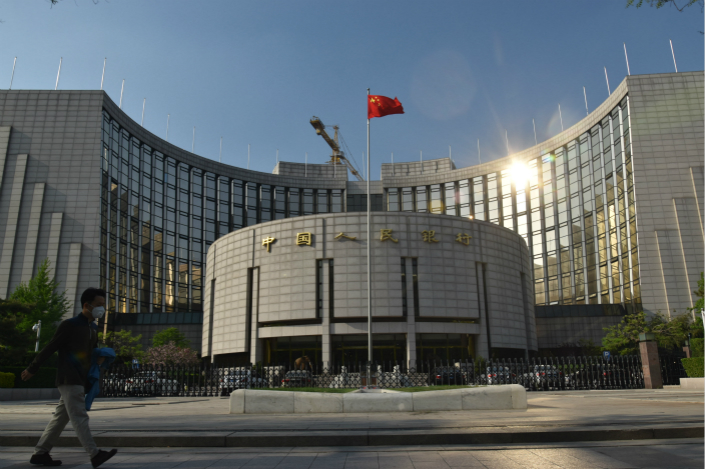 The headquarters of the People’s Bank of China is seen in Beijing on April 20. Photo: VCG

(Beijing) — A jump in corporate bond defaults in China this year has set investors on edge as concerns grow that more companies will fail to repay their debts amid a squeeze on liquidity and higher interest rates.

The Financial News, the official newspaper of the People’s Bank of China (PBOC), carried an interview with an unnamed central bank official on Monday in what might be an effort to calm market nerves and reassure investors that risks are under control.

In a sign that the central bank wants to reassure markets that it will maintain ample liquidity in the interbank market, which oils the daily wheels of the financial system, the PBOC injected 200 billion yuan ($31.1 billion) on Tuesday through the issue of one-year Medium-Term Lending Facility loans to selected banks.

The interview with the central bank official, which was also posted on the PBOC’s website, gave an overview of the central bank’s policy stance and management of monetary policy and liquidity, and hailed its success in curbing financial risks and controlling “shadow banking” — off-balance-sheet activities that elude financial oversight. The official said the central bank will maintain a stable and neutral monetary policy, and make pre-emptive adjustments to policy according to its assessment of the market situation.

The PBOC has also set up an international financial-risks team to monitor domestic and international economic and financial conditions and guide and stabilize market expectations, the official said.

Turning to the bond market, the official said risks were controllable overall; bond default rates were still low; and market liquidity was reasonable and stable. He acknowledged an increase in defaults this year but said that overall, the rate was “not high.”

A total of 13 companies defaulted on 20 corporate bonds with a combined face value of 14.2 billion yuan from January to early June this year, more than half the value of bonds in default over the whole of 2017, according to a report (link in Chinese) by China Central Depository & Clearing Co. Ltd., a state-owned company that provides depository and clearing services for the domestic bond market.

The PBOC official said that the total value of unpaid debt involved in the corporate bond defaults amounted to 66.3 billion yuan at the end of May, accounting for only 0.39% of the value of outstanding corporate bonds. The defaults were randomly distributed in terms of the industries or areas the companies were involved in, and there were no signs that risks were concentrated in any particular sector, the official said.

Addressing concerns about credit growth and liquidity, the central bank official attributed the slowdown in May total social financing (TSF), the country’s broadest measure of credit, to strengthened regulation and deleveraging policies.

TSF rose by 760.8 billion yuan in May, the smallest monthly increase in 22 months, according to data released by the central bank on June 12. The TSF grew 7.9 trillion yuan in the first five months of the year, 1.4 trillion less than the increase in the same period last year.

The central bank surprised markets last week when it failed to immediately follow the U.S. Federal Reserve’s rate hike with an increase in its own interbank market interest rates, as it did in March and December.

The decision may reflect the PBOC’s concern about maintaining stability in domestic financial markets amid the surge of credit defaults and the slowdown in TSF, said Liang Hong, chief economist with securities firm China International Capital Corp. Ltd.

The TSF figures suggest that market liquidity has been tight in recent months, while the producer price index had dropped month-on-month for three consecutive months since February, indicating increasing pressure on companies’ profitability and cash flow, she said.

Overtightening will lead to lower economic growth, and a faster decline in the pace of expansion may work against the goal of the deleveraging and risk prevention campaign, Liang said.