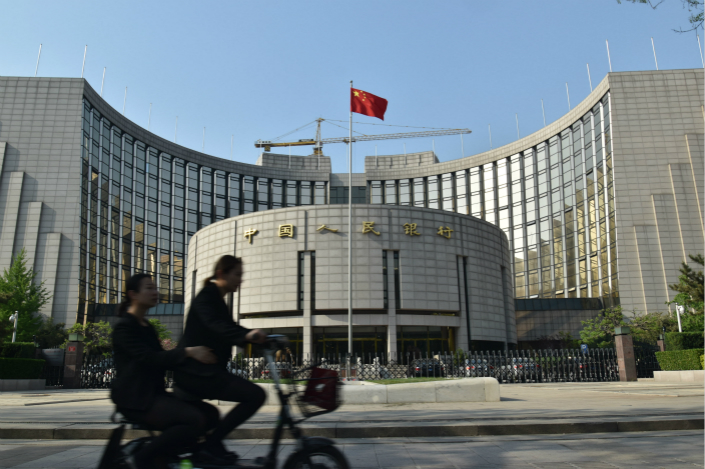 The People's Bank of China headquarters in Beijing on April 20. Photo: VCG

The People’s Bank of China (PBOC) is broadening the kinds of collateral it accepts for medium-term lending operations, aiming to increase support for smaller firms, agriculture and the green economy in particular.

The PBOC said it will accept AA-grade-and-above small-and-micro enterprise bonds, green bonds, and agriculture-related financial bonds; AA+ and AA grade corporate credit bonds; and high-quality small and micro-enterprise loans and green loans as collateral for its Medium-Term Lending Facility (MLF), according to a statement issued June 1.

This new move comes in the midst of a swath of bond defaults, with many companies struggling to sell the bonds they try to issue. Allowing lower-rated bonds to be used as collateral should increase demand for them and so help firms, particularly those in targeted sectors, gain more access to financing.

The move should also help smaller financial institutions that lack much high-quality collateral to get access to more loans from the central bank, according to the notice. High-quality collateral was concentrated among large-scale commercial banks, with small and midsize institutions having relatively little, according to a recent quarterly PBOC report on monetary policy.

The new kinds of collateral will join central bank notes, treasury bills, policy bank bonds, local government bonds, and AAA-rated corporate bonds as legitimate guarantees for MLF loans. China’s outstanding MLF was 4.017 trillion yuan at the end of May, according to the PBOC.

But it does not indicate overall loosening or deleveraging, according to Lu, who sees the central bank notice as part of a combination of recent policies that maintains emphasis on deleveraging. Also on Friday, the PBOC and the securities regulator released tighter rules on money market funds to reduce liquidity risks, and the insurance regulator released rules to prevent excessive lending to a single corporation from multiple banks, Lu said.

Analysis by Nomura Global Economics argued that the policy is a sign of moderate monetary easing. “The extension of the MLF collateral criteria, along with other recent monetary easing measures, such as the reserve ratio requirement cut in April, could help ease liquidity tensions among financial institutions and lower the funding cost of the real economy,” according to a note by Ting Lu, chief China economist at Nomura Global Economics.

Some analysts think this policy may not be enough to help companies that are struggling to raise money, however. CICC fixed income analyst Chen Jianheng recommends the government try to support the development of more risk-tolerant investors than banks. “It is not very realistic to rely on banks’ own funds to absorb medium- and low-grade credit bonds; it’s necessary to cultivate some high-risk-tolerant non-bank institutions to ease the problem,” Chen said.