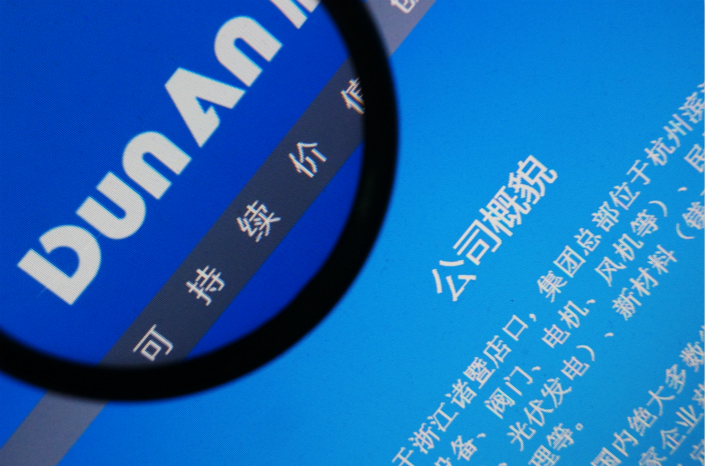 * DunAn issued 10 ultrashort-term notes in 2017 worth more than 7.2 billion yuan, but company used nearly half of the debt it raised last year to repay existing liabilities

* Company is expected to dispose of certain assets, including about 4 billion yuan in real estate

(Beijing) — The Zhejiang provincial government kicked off the first work day in May by calling a meeting to discuss the debts of DunAn Group, a precision-equipment manufacturer in the wealthy coastal province, whose liquidity dried up after a failed bond issuance in May.

Signs of trouble at DunAn emerged when a listed subsidiary canceled plans to issue 300 million yuan in bonds because of changes in “market conditions.” Unable to refinance, the company soon found itself on the line for a series of bonds maturing in close succession.

The private company, which employs 29,000 people, then went to the government for help.

The Zhejiang provincial government’s involvement highlights the official concern about the wave of corporate debt coming due this year and next, particularly among struggling private companies like DunAn that have gorged on short-term debt without planning for the day when credit grows hard to come by.

Liquidity has tightened this year due to the government’s ongoing deleveraging campaign and regulators’ efforts to clamp down on “shadow banking,” said Christopher Yip, corporate ratings analyst at S&P Global Ratings. “Smaller companies that have relied on short-term financing and have been complacent about planning ahead in terms of refinancing are going to be in the most trouble,” he told Caixin.

In the first four months of 2018, 15 companies failed to repay their bonds, 25% more than in the same period last year, according to a report from China Central Depository & Clearing Co. Ltd., a state-owned company that provides depository and clearing services for the domestic bond market. The amount of money involved jumped by 33.6% to 12.9 billion yuan.

The recent defaults coincide with a peak in corporations’ domestic bond refinancing needs, according to Fitch Ratings. More than 4 trillion yuan in bonds issued in 2015 and 2016, when credit conditions were loose and the domestic exchange bond market lowered barriers to entry for corporate bonds, will become due or puttable in 2018 and 2019, Fitch said in a note in mid-May.

According to Caixin estimates, DunAn issued 10 ultrashort-term notes in 2017 worth more than 7.2 billion yuan in total, nearly two-thirds of which it issued in the second half of the year. However, the company used nearly half of the debt it raised last year to repay existing liabilities.

Just a year ago, DunAn was considered a high quality asset, receiving top valuations from securities and credit ratings firms. For nine consecutive years, it was named one of China’s top 500 enterprises, a list jointly compiled by the China Enterprise Confederation and China Enterprise Directors Association.

“The trend of increasing defaults is clear. More default events could lead the market to price the risk better and help the development of the financial system,” said Katie Chen, director of financial institutions at Fitch Ratings.

DunAn paid off 1.9 billion yuan worth of bonds this month by pledging shares of a listed subsidiary, partially easing creditors’ concerns about a default.

One day before a 1 billion yuan note came due, Zheshang Bank provided an equity-backed loan to DunAn. In turn, the company pledged 158 million shares in Anhui Jiangnan Chemical Industry Co., a Shenzhen-listed subsidiary, as collateral to the bank. The shares were worth 854 million yuan as of the stock’s closing price on April 27.

Shares of Anhui Jiangnan have been suspended since May 1 “pending a major disclosure” from the parent company. DunAn’s other listed company, Zhejiang DunAn Artificial Environment, also halted trading on the same day.

Last week, DunAn pledged another 1 billion yuan worth of shares in Anhui Jiangnan to pay off the 900 billion yuan in bonds that matured last week, according to a report from Yicai.

On Wednesday, Zhejiang DunAn Artificial Environment announced it planned to sell assets and businesses worth 6.95 billion yuan, or about 50.24% of its total assets, to China Electronics Systems Engineering Corp., a subsidiary of state-owned China Electronics Corp.

The company still has 6.2 billion yuan in bonds that will mature this year, according to Bloomberg data, with the first bond, worth 800 million yuan, coming due on June 12.

To dig itself out of debt, DunAn is expected to dispose of certain assets, including about 4 billion yuan in real estate, sources close to the matter told Caixin.

For the immediate future, the company won’t get much relief on the liquidity front. Liquidity is going to get worse before it gets better as government initiatives are still in the process of unfolding, S&P’s Yip said.

But China’s corporate debt defaults are unlikely to spiral out of control. “Defaults are expected to happen in a managed manner, and a wide range of defaults is less likely as maintaining social and financial stability remains the top priority for the regulators,” Chen said.