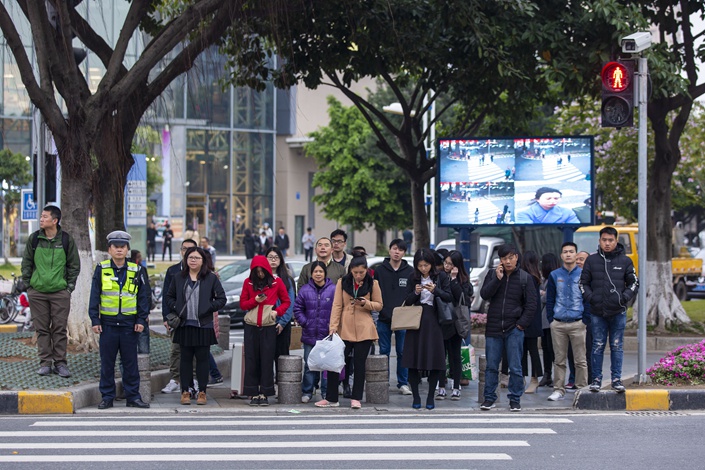 People wait at a pedestrian crossing in Guangzhou, Guangdong province on Feb. 25. To discourage traffic violations, people who cross when the light is red will be filmed by a video camera and the footage will be replayed on a big screen. Photo: VCG

Some residents of a growing number of Chinese cities are benefiting from personal credit scoring systems provided by local authorities, easing access to bank loans and public services such as libraries and transportation.

On the flip side, banks in Zhejiang province told a businessman in January that he was ineligible to borrow because of fines unpaid since 2012 for violating the one-child policy, according to creditchina.gov.cn, a government-backed social credit website.

As personal credit ratings become ubiquitous in Chinese people’s everyday lives, criticism of the local rating systems is mounting. Applying nonfinancial data to credit decisions isn’t fair, and neither is using social credit scores to determine access to social services, some critics say. And the potential for data leaks from the massive scoring systems could put many millions of Chinese people at risk.

“The idea of using a credit scoring system to fix all kinds of social issues is unrealistic and even harmful,” said Wang Lu, a former official at the central bank’s credit rating department.

China is taking a unique approach to social credit scoring compared with developed Western economies in North America and Europe. In many countries, private, third-party companies such as Experian and TransUnion provide individual ratings for lenders, landlords and others based mostly on people’s financial histories.

Since the first 12 cities including Hangzhou, Nanjing and Xiamen initiated local personal credit scoring system in December 2017, nearly 20 cities have created similar official systems, and more are on the way. The local systems are part of an enduring national campaign following a 2003 central government initiative to build up social credit systems in China and make credit records an important part of social life.

In the government work report to the March legislative meeting, Premier Li Keqiang reaffirmed efforts to set up social credit systems and proposed the idea of credit-based supervision as part of the government’s pledge to reform the social governance mechanism.

In Fuzhou, the capital of the southern province of Fujian, a construction company recently found it could get a 10% discount on bank services, thanks to a sound Jasmine score for the company’s legal representative. The Jasmine score, named after Fuzhou’s city flower, is the city’s personal credit reference. A rising number of financial and public institutions in the city are using the Jasmine score for citizens, offering greater convenience to those with high scores.

But the broad use of personal credit scores to determine people’s access to public services has raised fairness concerns. Some experts argued that the practice may abuse people’s rights by assessing personal credit using factors unrelated to trustworthiness.

“The essential purpose of credit information is to help (financial institutions) assess customers’ risk exposure,” said Lai Jinchang, a tech expert at the World Bank's International Finance Corp., in a speech. “It should not be imposed with too many (other) factors.” Lai said the concept of a social credit system is an experiment in China that is unprecedented anywhere else.

Suining County in Jiangsu province was the first in China to initiate a personal credit scoring system in 2010. Rating residents’ credit by four levels, city authorities took into account a wide range of factors including contributions to local investment and records on spreading rumors online, which stirred debate over whether noncredit-related records should be included.

Legal experts have voiced concern that local authorities may abuse the concept of credit in their rating systems. Liu Chunquan, a lawyer at the Shanghai Duan & Duan Law Firm, said credit scores should simply reflect individuals’ ability to make repayments rather than their character. “Otherwise, it will be misleading,” Liu said.

A central bank official said some local governments have extended the idea of credit scoring by taking into account a broad range of factors that are actually unrelated to personal credit.

“How does running a red light relate to personal credit?” one credit rating professional said.

The use of credit scores in social management also drew the concern of some legal experts. Many cities with credit scoring systems have imposed punitive measures such as limits on public services for people with lower scores. Some cities have cited credit scores as a reason to deny people’s access to bank loans, public transportation or even their children’s school admissions, according to several legal experts.

“What is their legal basis?” asked one expert.

The ways many local governments use the credit scores are too careless, experts said.

“Authorities should use personal credit scores prudently, as it can have profound impacts on people’s basic rights,” said Wang Xinrui, a senior partner at Beijing Anli Partners. “It should be fully justified.”

Governments’ massive collection of personal data for credit scoring has also raised concern over the protection of privacy. Whether local governments have the financial and technical capability to maintain and ensure the security of their huge systems for gathering personal information remains a question, several credit industry sources said.

“If there are data leaks, it will not only cause huge economic losses but also hurt the governments’ reputation,” said an expert at the Ministry of Public Security.

Experts are calling for clearer guidance to define the scope for local authorities to collect and use personal data.

“There should be legal arrangements to spell out what kind of information can be collected and under what circumstances,” said Liu at Shanghai Duan & Duan. “The core issue is that personal credit should not be abused.”

Currently, credit scoring-related businesses and activities are under the supervision of both the central bank and the National Development and Reform Commission (NDRC). While the central bank oversees credit assessment in financial sectors under the 2013 Regulation on the Administration of Credit Investigation Industry, the NDRC supervises a broader range of credit-related business in the economy.

But there are gaps and inconsistencies between regulations of the two authorities. For instance, the NDRC in October approved 26 agencies in a pilot program to provide credit scoring-related services, even though some of them were previously rejected by the central bank for credit scoring services.

Industry insiders and legal experts are demanding unified regulations and an overarching law to govern the fledgling social credit-scoring sector. However, such legislation may not soon materialize.