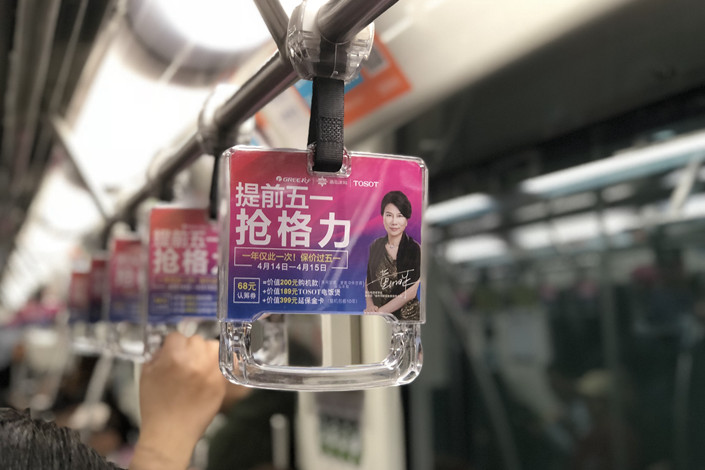 Gree Electric Appliances Inc. of Zhuhai is facing an ownership shakeup as a state-owned shareholder is looking to sell its controlling stake in the home appliance giant.

Gree Electric — run by the outspoken Chinese businesswoman Dong Mingzhu — is controlled by the Zhuhai city government through the state-owned Zhuhai Gree Group Co. Ltd., which holds 18.22% of the Shenzhen-listed company.

However, “Gree Group is looking to divest part of its stake in a deal that could lead to a change of the Gree Electric’s ownership structure,” the appliance-maker said in a filing (link in Chinese) to the Shenzhen Stock Exchange late Monday.

The filing, which said the deal still needs regulatory approval, did not disclose the buyer, the size of the deal, or how much of Gree Group’s stake is up for sale. Caixin, however, has learned that the deal aims to bring in a strategic investor for Gree Electric.

E-commerce giant Alibaba Group Holding Ltd. and rival JD.com Inc. have both denied widespread rumors that they had taken part in the deal.

Gree Electric’s shares closed at 47.21 yuan ($7.02) on Monday, before the company suspended trading of its shares. At that price, the company’s has a market capitalization of 284 billion yuan.

If the deal goes through, it will dilute Gree Group’s control — and the power of the Zhuhai government — over Gree Electric, effectively shifting more power to the appliance-maker’s board of directors.

As the largest individual shareholder, Dong owns 0.74% of the company, giving her the 10th-largest stake. Known as the “iron lady” partly due to her outspoken style, Dong was hailed as the most successful businesswomen in China by Forbes magazine in 2017.

Dong has previously collided with Gree Electric’s state-owned shareholder. She was chosen to lead both Gree Group and Gree Electric in 2012, but was abruptly removed from her position as the chairwoman of the parent company in 2016.

After her previous tenure as Gree Electric’s chairwoman ended in May, the company left the position in limbo for months until management confirmed in January that Dong would remain in the role.

Dong has publicly expressed her dissatisfaction with the Zhuhai government and the bureaucratic nature of China’s state-run corporate system. “There is a structural issue with the internal ownership of state-owned companies, which have been strangled by ‘too many bosses’,” she said in a speech at this month’s meeting of the Boao Forum in Hainan province.

Gree Electric, with its staple air conditioner business, has in recent years tried to diversify into other areas, such as electric vehicles and chip-making, but without much success. In the first half of 2018, the company generated 90.9 billion yuan in revenue, with more than 80% coming from air conditioner sales.