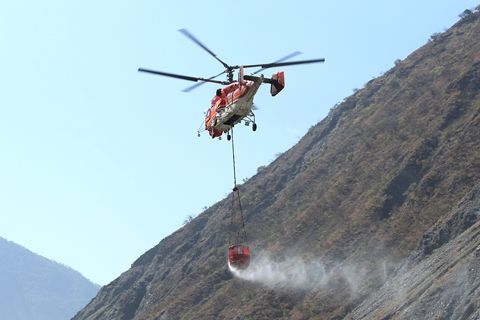 China has launched investigations into the cause of and efforts to fight a massive forest fire that claimed 30 firefighters’ lives in the southwest province of Sichuan, local authorities said Tuesday.

The firefighters were killed by huge fireball and explosion created by a sudden change in wind direction when they were heading to another spot to fight the blaze, officials said at a Tuesday briefing on the tragedy.

The fire broke out March 31 in rugged mountains at an altitude of about 4,000 meters in Liangshan prefecture in Sichuan and was extinguished Tuesday, officials said. A total of 689 firefighters were dispatched to put out the fire.

The large number of casualties sparked discussion of how such a lethal wild fire should be handled. Experts said forest fires at high altitudes need to be carefully dealt with because of the complexity of the environment.

The Sichuan government set up a special team to investigate the cause of the fire and whether fire-fighting efforts were properly managed. Experts will specially study the cause of the explosion effect, officials said.