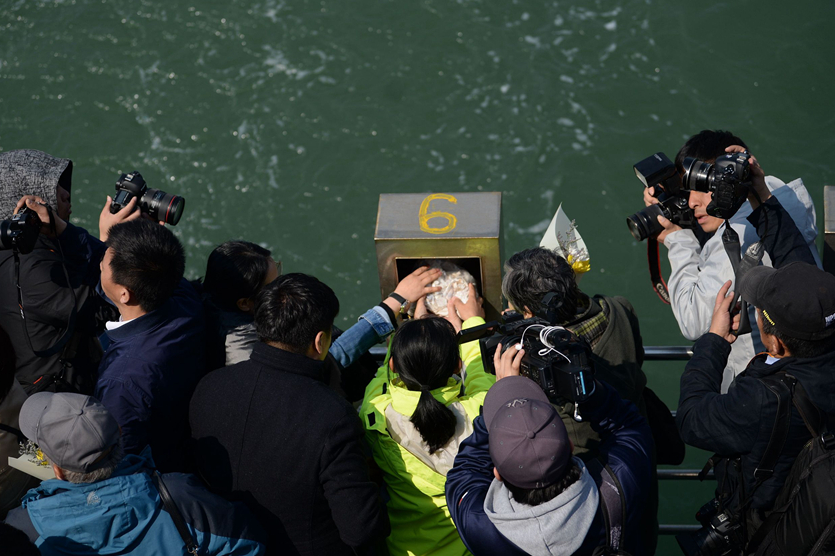 Tomb-Sweeping Day, which falls this Friday, is an annual festival in which families worship and clean their ancestors’ gravesites — something many Chinese do throughout the year, holiday or not.

But finding a resting place for your loved one’s remains — by burial or cremation — itself has become a touchy issue in China, as the populous country runs low on available land, and the government urges the latter method.

For example, in Jiangxi last year, enforcement teams entered village homes, seized empty coffins, and smashed them with excavators, in an attempt to reduce burial rates.

In recent years, a few local governments — mostly along the coast or the Yangtze river delta — have sanctioned certain areas for a lesser-practiced rite in China: sea burials.

Though uncommon here, sea burials have a notable history in China. Former leaders Zhou Enlai and Deng Xiaoping were both buried at sea. Shanghai reportedly became the first Chinese city to authorize such burials, in 1991.

The trend seems to have gotten the attention of local governments in Beijing and Tianjin and the surrounding province of Hebei, who jointly organized a “sea funeral” event Tuesday in the nearby Bohai Bay.

Families boarded the cruise ship “National Guest,” exclusively arranged for the event, and gently threw ashes of their relatives into the sea.

The event was in part organized to streamline what has been a scattershot practice in the busy bay, where people would board various passenger ships and personally scatter their loved one’s remains.

One official noted that such sea burials weren’t as uncommon as people think, saying some 50,000 have taken place over the last two decades (a number that could not be verified).