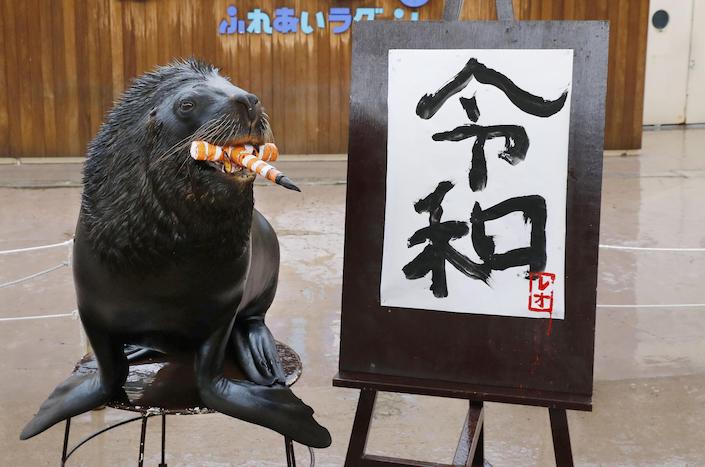 A South American sea lion holds a calligraphy brush in his mouth with which he wrote the kanji characters showing the name of Japan's new era, 'Reiwa,' at an aquarium in Yokohama, near Tokyo, on April 1, 2019. The new era, announced by the government earlier in the day, will begin May 1 when Crown Prince Naruhito will ascend the throne to succeed his father Emperor Akihito. Photo: VCG

When Japan unveiled the name of its new imperial era on Monday, Australian real estate organization REIWA was thrilled by how many people were inadvertently tweeting its name.

But for one Chinese wine business, also named “Reiwa,” the coincidence is raising some legal questions.

“Reiwa” was registered as a trademark by in China by Chinese businessperson Liu Zhenxi in November 2017. Since it was registered before Japan’s announcement, and has no connection with the imperial transition, the trademark doesn’t violate Chinese domestic regulations against trademarks with political meanings, according to Zhang Weijun, director at Tongji University’s intellectual property and competition law research center.

In Japan, an imperial era name is used throughout an emperor’s reign on calendars and has strong political and cultural connotations.

It is not clear if there are currently any Reiwa wine products being sold in China.

Liang said that if Japan signals a desire to avoid commercializing the era name, China will likely take heed and be more careful with any related approvals in the future.

According to China’s Trademark Law, trademarks will be rejected by authorities during the registration process if there’s evidence that it could have any "negative influence,” Liang explained.