China’s Monkey Paradise is a Hidden Gem for Family Travel 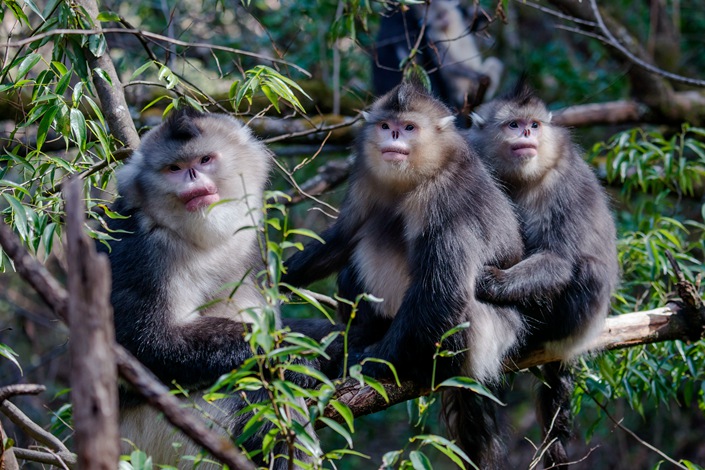 Red Dot and two of his wives. Photo: IC

The crowd listening to Dr. Long Yongcheng is glued to his love story. It goes like this:

“Red Dot came to the valley in 2015 looking for a wife. Eight girls fell in love with him. He only chose six. The six wives gave birth to four babies in 2016. One of the babies died. Then they produced another four in 2017, and two in 2018, and one so far this year, with three more likely on the way. Six wives and 10 kids! Red Dot now has the biggest family in the valley.”

Red Dot is the name of one of the snub-nosed monkeys living in the Tacheng Yunnan Snub-Nosed Monkey National Park. The park, practically unknown outside of the region, is tucked within the Eastern Himalayas, bound by the upper reaches of Yangtze River to its east, and the Mekong to the west. Both rivers run parallel, north to south, effectively creating an island of wildlife stretching northwest toward Tibet.

It is China’s hidden gem when it comes to summer travel spots for families.

Tacheng relies on its more famous neighbors for access to the outside world. The nearest airport in Shangri-La is a two-hour drive away; Lijiang’s airport is five. But this remoteness means it holds a special place in Chinese tourism. While millions of package tours descend on Shangri-La and Lijiang every year, Tacheng attracts the anti-bus-tour crowd.

Yunnan’s snub-nosed monkeys usually live at very high elevations, often around 4,000 meters, in a terrain that is covered in snow in winter. The babies are born with pure white hair, adorable bright-red lips and pug noses (due to their lack of nose bones) – which have won them their cute nickname in Chinese: “Snow Mountain Smurfs.”

Sadly, the monkeys are losing habitat, due to cattle grazing and hunting. So they have retreated further into the mountains, making it difficult for people to get a glimpse of them. Dr. Long Yongcheng, the best-known primatologist on the species, spent years studying the monkeys before he could successfully photograph one.

In 2009, Tacheng Snub-Nosed Monkey National Park was created to “showcase” the monkeys. That’s when park authorities made the controversial decision to feed monkey families, creating a naturalistic kind of zoo where it’s possible to observe the monkeys in the wild.

The park provides food to six monkey families in the valley, Red Dot’s family being the largest. They’re all watched very closely, and the rangers can tell you the name and personality of every member of every family. I asked Dr. Long if the feeding caused pushback among the conservation community, who might prefer the monkeys be left to their own devices.

“Of course it is controversial, but I think it’s necessary,” he told me. “This is a window for people to get to know the snub-nosed monkeys. If no one knows, then no one cares. The purpose of feeding is to educate and influence more people to care about a beautiful species that’s worthy of our care.”

The monkeys do seem far more at home in their environment here than, say, the pandas in the zoos of Chengdu.

On the day of my arrival, I ride a golf cart for 20 minutes, and then hike an additional 20, just to get to observation station No. 1. But then, there they are: three families of monkeys jump up and down on the pine trees, seemingly having a rollicking party. Meters away, behind a rope, visitors and a Chinese television camera crew aim at the monkeys with iPhones and Canons.

There are many trails connecting the various feeding sites. The rangers always know exactly where the monkeys are on feeding each day, and route all golf carts to that specific site.

The walk from cart to monkeys ranges from 20 to 45 minutes. But if you’re enjoying the nature, you can hike the entire loop connecting all the feeding sites in two to four hours. There are also sections of the ancient Tea and Horse Caravan Road – the ancient trade route that connected Southwest China to the Indian subcontinent – in the park that are great for hiking. There are fields of wild peonies further in the mountains, according to Dr. Long. I’ll have to give it more time to explore next time.

So, why aren’t Tacheng snub-nosed monkeys known worldwide, like Rwanda’s gorillas or Jane Goodall’s chimpanzees? It’s not for a lack of effort. Aside from Dr. Long, many other scientists like Dr. George Schaller and Dr. Craig Kirkpatrick have advanced our understanding of the species. And wildlife photographer Xi Zhinong brought the monkeys’ story to light with his groundbreaking documentary on CBS.

But still, there are limited travel offerings for the public. The rangers have a ton of information, but they are not trained to share it with the public.

The local ranger who accompanies us on our hike, Yu Yaohui, is quiet and shy, but mumbles plenty of facts about the plants and monkeys. He points to a dark green bush by the side of the path – it looks exactly like the rhododendrons seen in yards all over the U.S. and Europe. Yunnanese people often forage wild rhododendron flowers to steam with eggs or stir fry, but Yu says the bushes here are not edible for humans because of their toxins. The monkeys, however, eat them as a natural medicine to “deworm.” That's something I would not have learned anywhere else.

I have a dream. One day, there will be an organization similar to Roots & Shoots in Tacheng, and there will be a Chinese Jane Goodall. Then, kids will flock to the park.

But for now, I am very content to be one of 8,100 visitors to the park annually.

If you’d like to join, here’s my practical advice for travelers:

1. Avoid the actual Tacheng township. The town itself has no identifiable features of its own, and is just a run-of-the-mill fifth-tier county township.

2. Steer clear of the blocky hotels in town and opt for a small lodge instead, either in Hada Village or inside the national park itself. There are two beautiful, small hotels in Hada village, Songtsam Lodge and Habuda Yungu Lodge, each with about a dozen rooms. The villages are great for experiencing village life, but if you’d rather get closer to nature, you can stay at the Lisu Cabins and the Park Scholar Lodge inside the park. These are cheaper, ranging from $25 to $70 a room, and are perfect for city kids to listen to some bird songs.

3. Tacheng alone might become boring after a week, so incorporate Tacheng into a larger itinerary. If you are visiting China for the first time, spend a week traveling around Beijing and Xi’an before coming to Tacheng – or if you just want to be in Yunnan, combine Tacheng with visits to Dali and Shangri-La.

4. Be resourceful. Invest time to get to know the rangers, and be ready improvise on your own. The rangers have a ton of knowledge, but they are not trained to offer the knowledge on guided hikes around the park. The standard offering is a 100 yuan ($15) entrance ticket that includes rides to observation site and back. I am currently working with the national park to train the rangers on storytelling, so that they can offer learning walks later in the year. Until then, happy trails.

Zhang Mei is helping the park find volunteers to map its hiking trails and help with social media outreach. If you are interested in getting involved, contact her on Instagram @wildchinamei, or WeChat at yunnanzhangmei.