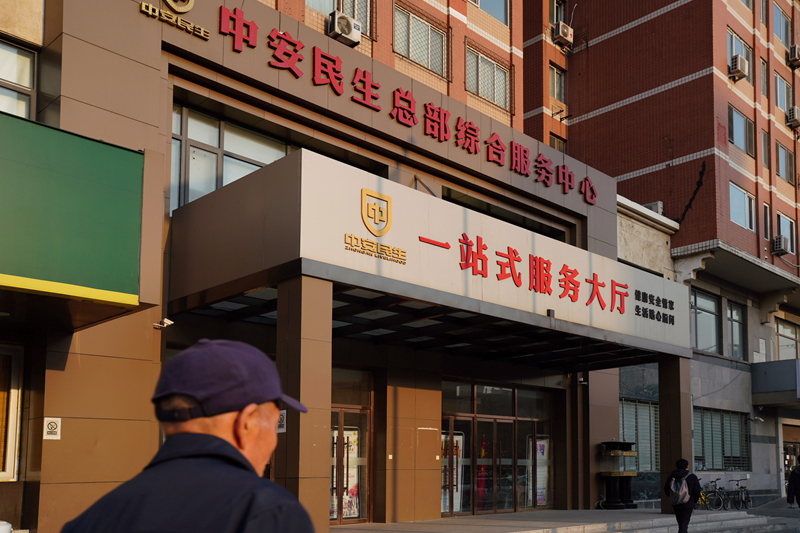 The dream of a secure and dignified retirement has vanished and turned into a nightmare for 65-year-old Lin Hui and his wife. The couple found out in February that they are at risk of losing their home because of a seemingly lucrative investment deal.

The Beijing couple pledged their 80-square-meter apartment in the city outskirts for a 3 million yuan ($447,000) loan. They invested the money through Zhongan Minsheng Elderly Service Co. Ltd. on the promise of earning 15,000 yuan ($2,234) a month to ease their tight budget. Retired more than 10 years ago from a poorly performing state company, Lin and his wife now make a combined 9,000 yuan a month, or close to the average personal monthly income in the capital city.

Lin said he was attracted by a lucrative investment plan offered by Zhongan. Under the plan, the Lin couple authorized Zhongan to help them borrow with their home as collateral and then invest the proceeds in projects managed by Zhongan. The company promised the Lins an annual return of 5.8%.

The investment plan, described by Zhongan as a “reverse mortgage” designed for elderly investors, sounded like a good wealth-management solution for retirees who own a home but need more cash to improve their living, Lin said.

But less than three months after Lin pledged the home and signed the investment contract with Zhongan, the lenders accused him of failing to pay interest and threatened to sue him for breach of contract. At the same time, Lin stopped receiving investment returns from Zhongan.

Lin is one of as many as 190 retirees who invested in Zhongan’s plan and now face debt collection, according to an administrator of a 400-member online community set up by Zhongan clients. A rising number of them have encountered troubles similar to Lin’s since February, according to the online community.

In response to client inquiries, Zhongan issued a statement in March acknowledging a financial crunch and promising to take responsibility. But Caixin was unable to reach either of two shadowy businessmen who apparently are behind the operation. Industry experts said Zhongan’s activities may have skirted the law in several respects.

On April 3, Zhongan’s elderly service center outside Lin’s community was locked and guarded by police. An officer told Caixin that authorities have launched an investigation, without elaboration.

Zhongan represented itself as offering reverse mortgages under a Chinese government pilot program initiated in 2014 to bolster the incomes of elderly Chinese. Reverse mortgages appeared in the 1960s in the United States as a tool to help retirees to increase their income streams by tapping the equity in their homes. The idea is controversial and has been accepted by only a limit number of Western retirees because of concerns over complexity and costs.

In China, only a small number of financial institutions are qualified to offer reverse mortgage products, an industry expert said. What Zhongan marketed to Lin and other clients apparently was not the same as the concept of reverse mortgages approved by the government, the expert said.

In a legitimate reverse mortgage arrangement, seniors pledge their home in return for an annuity that pays them a regular amount based on their equity value in the house. The people retain ownership of the home, and after they die, their heirs can work with the annuity provider to settle remaining payments and ownership of the asset.

In this case, Zhongan apparently didn’t meet the strict qualification requirements imposed on financial institutions offering reverse mortgages. Instead, the company simply got seniors to put up their homes as collateral against loans and then invested the proceeds in short-term wealth management products on their behalf.

Lin said he believes he fell into a trap set by Zhongan from the very beginning.

In 2017, Zhongan set up an elderly service center outside the community where Lin lives. According to business registration records, Zhongan was established in 2016 with registered capital of 50 million yuan. The company marketed itself as an elderly service provider with a nationwide network.

The Lin couple first stepped into Zhongan’s service center because of its cheap buffet for retirees. The 6 yuan meals attracted a large number of seniors from the neighborhood. The company also offered free short trips for the elderly and often sent out small gifts.

In October 2018, Lin took part in one of the trips organized by Zhongan, during which the company gave a lecture on wealth management for the elderly and introduced what Zhongan described as a reverse mortgage idea.

According to a Zhongan customer contract viewed by Caixin, a typical mortgage plan marketed by the company involved customers entrusting Zhongan to use their properties for wealth management under agreed terms of investment returns.

“The idea is alluring as it enables seniors to earn money from their homes,” said Lin, who later participated in more Zhongan trips and decided to try the company’s investment plans.

“The company seemed to be financially capable because they could offer so many free meals and trips,” he said.

In late December, the Lin couple signed the loan contract with a representative of the lenders accompanied by four Zhongan employees, using their home as collateral. Lin cited a need to supplement capital for a wine business as the reason for borrowing, he said. That was because Zhongan staff told him to do so to make it easier to find proper lenders, he said. Lin got neither enough time to read the contract nor a copy of the document he signed, he said.

The same day, the 3 million yuan loan was sent to an account opened for Lin by Zhongan for investment purpose. The money was subsequently transferred to a bank account owned by Li Jiahao, Zhongan’s legal representative, bank transaction records showed.

Under the agreement, Lin used the money to buy an investment product managed by Zhongan with annual yield of 5.8%. But Lin said he has no idea of what exactly the investment product is, and it wasn’t until February that he realized there were problems, when the lenders — another couple — contacted him for unpaid interest.

Lin said he learned that Zhongan agreed to pay the lenders an annual rate of as much as 21.6%, meaning a monthly cost of 54,000 yuan.

“I fell helpless,” Lin said. “The creditors come and argue every day. My wife and I are so frightened... I can either sell my home or borrow from others” to repay the loan, Lin said. “Otherwise, the lenders will demand (the court) to auction my home.”

Cheng Jie is another Beijing retiree who pledged his home last year to make a 2.4 million yuan investment arranged by Zhongan. Since February, Cheng also has stopped receiving any returns on the investment and faces debt collection. Cheng said it wasn’t until then that he realized he was defaulting on 36,000 yuan a month of interest due creditors. In mid-March, the creditors sued Cheng.

According to the online community of Zhongan clients, Zhongan has helped them get loans from microloan companies, banks and individual lenders. Several individual lenders involved told Caixin that they learned of the demand for borrowing from friends or online platforms. Most of them said they didn’t know the money was borrowed to invest in wealth management products.

Chen Fang is one of the individual lenders. She found the loan deal on a mobile app called Meifang, an online real estate agent, and completed the lending contract through Meifang staff, she said. She never heard of Zhongan, she said.

Another lender, Wang Huan, also made a loan and earned monthly interest payments through Meifang until the borrower stopped payment months ago.

The interest gap between lenders and borrowers may suggest more layers of intermediaries in Zhongan’s investment plan. Several lenders told Caixin that they received monthly rates between 1.2% and 1.5% while senior borrowers said their monthly loan costs were as high as 2%.

Retirees including Lin and Cheng said they believe Zhongan colluded with lenders to cheat them and argued that the loan contracts should be invalid because they don’t know the terms in detail.

Lenders interviewed by Caixin said they didn’t know about Zhongan and can only pursue repayment from the borrowers who signed the contracts.

Several legal experts said it would probably be difficult to invalidate the retirees’ signed loan contracts. Meng Jie, a lawyer at Beijing Jingyue Law Firm, said the best solution for the senior investors is to seek help from police and demand an investigation of Zhongan.

After starting its reverse mortgage pilot project with four cities in 2014, China expand the trial nationwide in 2018. Meanwhile, a growing number of fraud cases under the guise of reverse mortgage deals surfaced, according to media reports.

Chen Lei, a manager at Happy Life Insurance Co., said the government has set strict requirements on institutions’ financial capacity and business procedures to launch reverse mortgage projects. However, many deals marketed by small firms are not qualified.

Happy Life is so far the only insurer in China that has engaged in the reverse mortgage business. As of March, the company has made deals with only 133 households, according to Chen.

Yang Fan, a lawyer at Guangdong Ford & Ford Law Firm, said Zhongan may have broken the law by illegally taking public funds for investment or fraud if it cheated on the use of the money.

Business registration records showed that Zhongan’s asset management unit, which signed the investment contract with the senior investors, is not eligible to raise funds publicly or conduct loan-related business.

Although the company has marketed itself as an elderly care expert, it has a bad track record in the sector. In 2016, a charity fund set up by Zhongan specializing in elderly care was closed by the Ministry of Civil Affairs for accounting fraud. The ministry also accused the fund of launching a reverse mortgage-style business and misleading the public.

A former Zhongan employee said the company is controlled by a businessman named He Shengyang, although he doesn’t appeared in Zhongan’s shareholding structure.

At a meeting March 10 with investors, Zhongan’s legal representative Li Jiahao said the company encountered difficulties in its financial business, which is overseen by He, company clients told Caixin. Li said the company has lost contact with He. A Zhongan customer service staffer also confirmed with Caixin that He is the actual controlling owner of Zhongan but has been out of contact.

On March 25, the company on its social media account outlined a business transformation plan with investment projects including elderly care facilities, logistics parks, housing developments and aluminum production plants. Zhongan said it expects sound returns from listing some of the assets on domestic or U.S. markets to repay investors.

But whether Lin and other retirees can get their money back remains a question as Caixin learned that most of the projects mentioned by Zhongan are in financial or legal trouble.