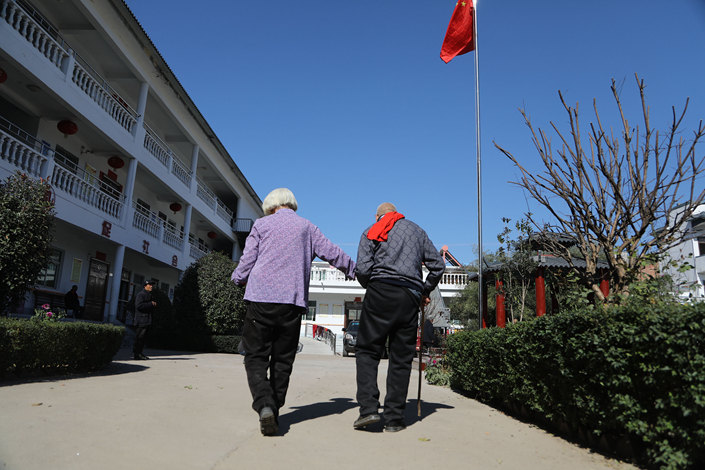 The suicide rate among China’s elderly is up to seven times higher than that of the rest of population, according a study presented at a medical conference last weekend. With the deepening of the aging population crisis, this rate is set to increase, the study said.

Fan Peizhen, an associate professor of psychiatry at Taiwan’s National Yangming University, presented the study to the Lancet-China Academy for Medical Sciences annual conference in Beijing on Saturday. The results of the study reflect fundamental changes in Chinese society brought about by the rapid urbanization that has left much of China’s rural population 65 and older lonely and depressed.

While China’s urbanization has caused the suicide rate to decrease overall — a report from Hong Kong University estimates a 58% drop between 2002 and 2011 — the rate among people 65 and older has increased dramatically in the last decade, though 2015 saw a marginal decline, Fan said.

As huge numbers of young people moved to urban hubs to chase employment and other opportunities, the elderly were left behind. It became more difficult for younger generations to care for the older generations of their families, resulting in many elderly people feeling that they were a burden to their children and even neglected. According to Fan, these feelings combined with loneliness, anxiety and low self-esteem contributed to the rise in suicides.

The Liuyang Psychiatric Hospital in Hunan province released research that cites loneliness as a leading cause of depressed mood and increased risk of suicide. “Elderly people who are feeling lonely are less likely to self-evaluate, are not always in good psychological health, do not always have good relationships with others and lack systemic social support. All of these things can contribute to suicidal thoughts,” according to the research.

Living alone and the “empty nest” phenomenon, in which two elderly people live together but not with the younger generations of their family, may increase feelings of depression. The American Journal of Psychiatry has previously published articles stating that older people who live alone are much more likely to have suicidal thoughts compared with older people in other living situations. Researchers at the Xiangnan University School of Nursing in China suggested that younger generations may alleviate the loneliness of their older relatives by calling or video chatting with them more frequently.

But the government, too, can do more. Fan said that the plan jointly issued by 14 government ministries in January to raise awareness of and care for the aging population by 2020 was a step in the right direction. However, she suggested China should also open more community programs to promote a sense of belonging among the elderly, work harder to combat discrimination against the elderly, and promote methods for adapting to different phases of life.