By Li Kun and Li Rongde 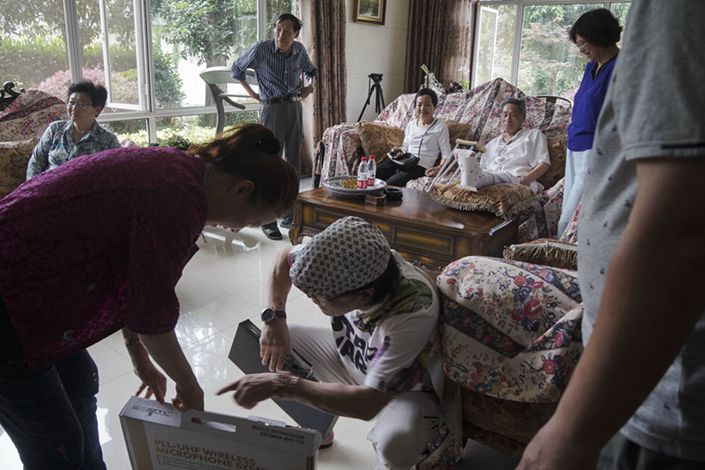 This villa in the eastern city of Hangzhou was turned into a co-operative nursing home by its owners Zhu Ronglin and his wife Wang Guifen. On June 6, residents gathered in the living room to send off two fellow residents, a couple who are leaving for a medical rehabilitation center for the husband to recover from a broken left foot he suffered in a traffic accident. Photo by Li Kun

It all started with an idea that Wang Guifen said would help her and her husband relieve boredom and loneliness.

Now Wang hopes that their decision to turn their villa in a rural town in the eastern city of Hangzhou into a co-operative retirement home could draw public attention to pressing issues linked to elderly care in China — a country that is aging rapidly.

Wang, 75, is a former manager of a local chemical factory, and her husband, Zhu Ronglin, is a retired English teacher in Hangzhou’s Yuhang district in the eastern province of Zhejiang. In 2010, to accommodate their large family, the couple moved into the house, which has eight bedrooms, each with its own bathroom.

But their son, grandsons and granddaughters soon tired of the long commute from the villa, in Hangzhou’s rural town of Pingyao, to the city’s downtown, and moved out before long.

The couple, left alone in the spacious house of more than 5,000 square feet, often got into fights over trivial things, Zhu said. He said that he became particularly grumpy after an operation for prostate cancer, and often found himself slumped in a sofa watching TV all day long.

“Then we’re telling ourselves that we might not have felt lonely if we could have people over to talk, or even better, to live with us and do stuff like playing mahjong together,” he said.

The couple then took a cue from news reports that a woman, also in Hangzhou, had opened her home to other retirees she recruited to live together, as in a nursing home.

The couple took out a newspaper advertisement for their own suitable recruits and selected 11 out of the 100 applicants via face-to-face interviews in May 2017. Residents are charged between 1,200 yuan ($180) to 1,500 yuan a month for each room they use, and the money has been used to hire three domestic helpers to cook and clean, and to tend the family garden. The tenants also share the utility bills and meal expenses.

The couple’s property is among 21 villa homes built by locals in the village in Pingyao, nearly 20 miles from downtown Hangzhou, and most of them are occupied by elderly people who have been left behind by their city-dwelling children.

Ye Jihua and Yu Youdi, who are both 69 years old, were the first couple to apply. They said their stay at the cooperative nursing home is a bargain because the home, while not intended to make a profit, provides like-minded retirees with companionship and mutual support.

Ye said they had been looking at proper elderly-care facilities since 2016, but got a reality check during their visit of three typical facilities. One small retirement home operated by the Yuhang district government is affordable, but the rooms are so cramped that residents can hardly move around, and the food isn’t good either, according to Ye.

The second, a combination of a nursing home and health rehab center for the elderly, is enjoyable, but the private facility costs more than 4,000 yuan a month per person, exceeding their budget.

The third one, the Hangzhou Second Social Welfare Courtyard, is funded by the city government’s civil affairs bureau. The facility in downtown Hangzhou costs as little as 1,000 yuan per person a month and had everything Ye said they had hoped for. “But the problem is that more than 1,000 people were already on the waiting list, and we would have to wait for three more years to get admitted,” he said.

A health scare involving Ye’s wife while Ye was alone on vacation in Thailand a couple of months ago prompted them to have second thoughts on their lives at the villa-turned-retirement-home, according to Ye. Ye’s wife was sent to the nearest township hospital after she had a heart attack one night, but the conditions at the small hospital were appallingly poor, he said.

“From that moment, we realized that it might not be a good idea to continue staying in the villa home in light of our health,” he said.

But the couple, who moved out recently, told Caixin that they miss the time they spent together with other retirees at the villa, where they ate, played together and helped each other out.

Most of the residents at the cooperative retirement home are from the generation that was able to have only one child under the country’s now-defunct one-child policy, which had for decades limited most couples to one child. That means that they could rely little on their children for support as the older generations have done even as they are increasingly in dire need for elderly-care services.

Nearly 18% of China’s population, or 255 million, will be over 60 by 2020, deeming China an aged country, according to a projection by the State Council, the country’s cabinet, in an elderly-care blueprint released in February 2017.

More than half will live on their own, according to the official document. That would pose a huge challenge when it comes to elderly-care services such as nursing homes.

Zhu said that he enjoys playing host to other needy retirees at their villa home and sees no reason to shut down the co-op as long as the residents are is in good spirits and good health. On top of that, he said, the couple never needs to worry about a shortage of applicants.

“But when our health becomes more frail, we might just have to sell the property off and move into a decent nursing home,” he said.