In Shanghai, Officials Can’t See the Wetlands for the Trees, Conservation Group Says 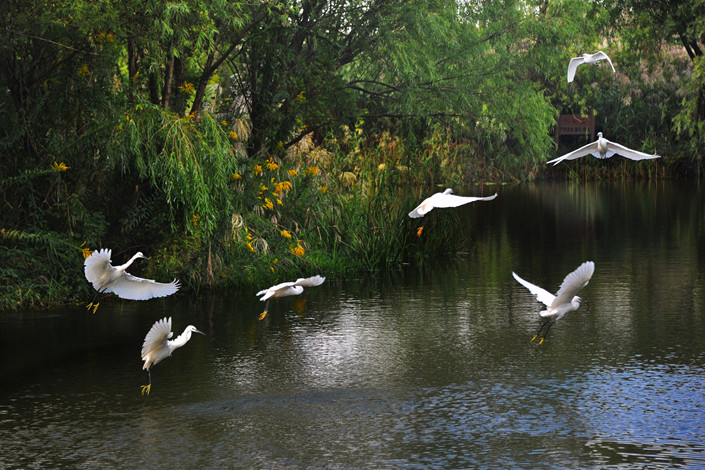 Wild birds fly in a wetland in Shanghai in October 2016. Photo: VCG

An environmental group has raised serious concerns about artificial forestation in the coastal wetlands outside Shanghai that are slated for continued development.

According to the China Biodiversity Conservation and Green Development Foundation, the natural ecology of the Nanhui New City area is wetlands and beaches — creating a vital habitat for 85% of bird species recorded in Shanghai and 28% of China’s total bird species on record.

Nanhui New City, also referred to as Lingang New City, is a hot urban development zone located at the tip of a peninsula on the Hangzhou Bay and the outskirts of Shanghai. It is about 60 kilometers (37.2 miles) from the city center, near the Shanghai Pudong International Airport. Recently, the Shanghai government approved Tesla’s plans to build a factory in Lingang.

Currently, the low-lying, water-rich Nanhui East Beach area has beaches outside the seawall and paddy fields and reed marshes inside the seawall. Inside the embankment, famers have leased land from the local government to grow rice or farm fish. Local wildlife protection volunteers have complained that outside the seawall, rapid land reclamation projects have led to a drop in marine life.

Birdwatchers frequent the area to observe the diverse species of birds, such as the endangered black-faced spoonbill and the near-threatened reed parrotbill. “It is of huge value ecologically, and the more I discovered it, the more I was amazed that more was not being done to preserve it,” said Craig Brelsford, founder and publisher of birding site shanghaibirding.com, who has long advocated for the area to be a nature reserve.

In 2017, a volunteer saw that engineering teams were beginning to fill some areas of the wetlands with soil, and later that year birdwatchers saw workers planting trees where there were previously paddy fields. The volunteers appealed to the government and the project stopped briefly, though the government said that “at present, there are no plans to have the wetlands permanently.”

A volunteer showed Caixin a more recent response to the question of what will happen to the wetlands, which similarly indicated that the natural wetlands may be filled due to forest coverage rate requirements. “The forest coverage rate of the Nanhui New City Administrative Region is only 11.5%, far below the average level of the city. According to local and municipal forest construction requirements, there is an objective need to increase forest planting in a planned and step-by-step manner,” the response read.

According to the Shanghai Landscaping and City Appearance Administrative Bureau, the forest coverage rate in Shanghai reached 16.8% in 2019. The city plans to build 17 “eco-corridors” by 2020 and increase its forest coverage to 25% by 2040.

The development plan always included forestation in the area to allow for further urban development. “According to our understanding, during the 13th Five-Year Plan period, 10,000 mu (1,650 acres) of trees will be planted in Lingang New City,” one article from the China Biodiversity Conservation and Green Development Foundation in March wrote. “Of this, over 3,000 mu have already been planted, and more than 6,000 mu of trees will be planted in 2019 and 2020.”

People close to Shanghai’s municipal urban planning department told Caixin that the city intends to designate Chongming Island as a breeding area for migratory birds. However, Brelsford lamented that the island is not easily accessible for tourists or children to come and appreciate “the flocks of shorebirds, ducks and migratory birds flying vast distances.”

The foundation called for a stop to artificial forestation in the wetlands area. “In order to protect the ecological diversity of the Lingang area, we strongly appeal for the area of trees planted in the coastal wetlands to not be too large,” the foundation wrote.

Brelsford, who is now based in Florida, said that forestation would “radically alter the natural environment” and “endanger the natural systems at Cape Nanhui, which are valuable, unique and worthy of preservation.”