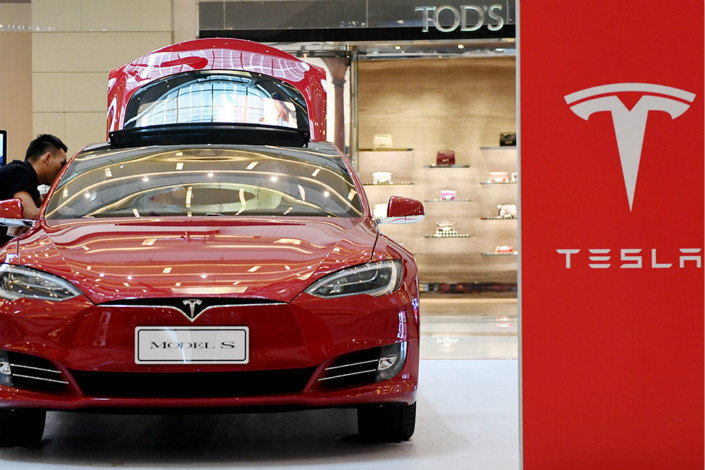 Tesla’s factory would be in the Lingang industrial zone in the city’s Pudong New Area, a source close to the Shanghai authorities told Caixin.

However, the agreement — signed this month — is only a letter of intent, meaning it is not legally binding, according to another source familiar with China’s policymaking.

Tesla did not respond to Caixin’s requests for comment.

Earlier this month, Tesla established a new company in the city to offer services, including research and development, as well as engage in the import and export businesses.

The establishment of the new company, Tesla (Shanghai) Ltd., is widely seen as a preliminary step toward Tesla Inc.’s goal of producing electric cars in the city. Tesla founder and CEO Elon Musk has said his company plans to announce the location of a plant in China as early as the third quarter of this year.

The company had been negotiating with the Shanghai government last year to open an assembly plant in the city, but the plan stalled, reportedly due to disagreements over the ownership structure.

The establishment of the new company came soon after Beijing rolled out rules to open China’s car market by allowing foreign automakers to take full ownership of their local ventures in the coming years.

The new policies, which will abolish the current 50% foreign-ownership cap on electric vehicle manufacturing by the end of this year, are widely said to benefit electric car producers like Tesla.

China has over the years promoted the development of new-energy vehicles with enormous government incentives — including subsidies and tax rebates — helping it hold on to the title of the world’s largest electric market since 2015.

Tesla has identified the country as its most important market after its home base of the U.S., where it sold 17,000 units last year, accounting for 16.5% of its global sales, according to the China Automobile Dealers Association.

However, all Tesla vehicles sold in China were imports. Even though Beijing has significantly lowered the car import tariffs, Tesla’s vehicles still retail at much higher prices in China than in the U.S.