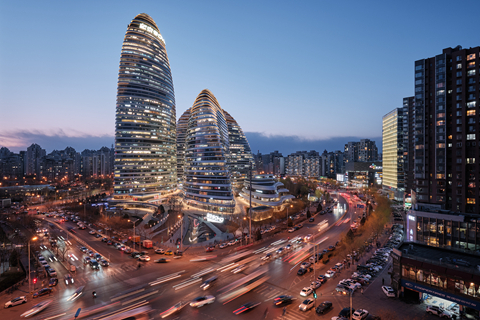 In China, the possibilities seem endless — including getting sued for criticizing a building’s feng shui.

Such is the plight of one WeChat account, which has just been fined 200,000 yuan ($30,000) for writing that one of Beijing’s landmark office complexes had bad feng shui — a pseudoscience, widely believed in China, that the orientation of structures affects their harmony and inhabitants’ success.

The building in question is Wangjing SOHO, a uniquely designed office complex run by developer SOHO China. SOHO itself is run by power couple Pan Shiyi and Zhang Xin, both well-known figures in China.

A Beijing court on Wednesday agreed with the couple that the building had been “defamed” when a blogger posted a WeChat article in November titled "Feng Shui of Beijing Wangjing SOHO, A Waterloo for Internet Companies?" The post — which went viral on China's internet — claimed the inauspicious location and layout of the building brought negative energy to tenant companies.

The court verdict against Zhuhai Shengun Network Technology, operator of the WeChat account — named “Shengunju,” or "fraud bureau" in Chinese — demanded the defendant pay $30,000 and apologize.

Plaintiff Pan went so far as to write on social media that some of his colleagues even worried that attributing bad feng shui to the building would bring psychological and emotional trauma to people who work there.

Related: How the Fabled Folk Tradition of Feng Shui Endures