By Zhang Xin and Denise Jia 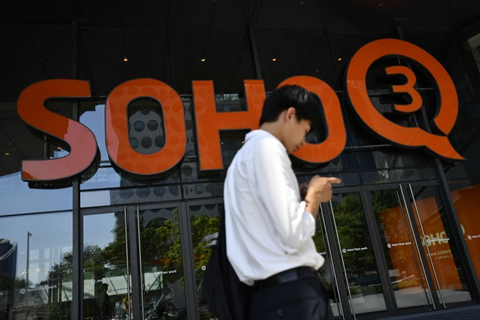 Soho Chief Financial Officer Sharon Tong said Tuesday at a conference briefing on Soho China’s 2017 earnings that the spinoff of Soho 3Q will take place “when the conditions are suitable,” with the listing’s timing and location depending on its business growth and market environment.

Soho China launched Soho 3Q, a community-focused, shared-office-space sub-brand, in 2015. By the end of last year, the country had 26 Soho 3Q projects, in Beijing, Shanghai, Hangzhou, Shenzhen and Nanjing. The average rental rate of Soho 3Q projects was 87%, according to Soho China.

Chairman Pan Shiyi said the company has completed its transition to an asset-light business model and has no plans to sell more assets.

Soho China’s remaining properties are all core assets after it sold over 20 billion yuan worth of properties in the last three years, Pan said.

In October, Soho China sold Sky Soho, a flagship office complex in Shanghai designed by the late British-Iraqi architect Zaha Hadid, for 5 billion yuan and made an estimated gross profit of 367 million yuan from the sale.

Pan has said the sales are part of the company’s strategy to capitalize on the rising commercial property market and shift toward focusing on core assets in prime locations in first-tier cities.

The company is currently developing a 100,000-square-meter mixed-use office and retail complex in Shanghai and mixed-use Leeza Soho tower in Beijing. Pan expected continuous valuation gains after these two projects are completed.