How Australian Casino Giant's China Dream Turned Into a Nightmare 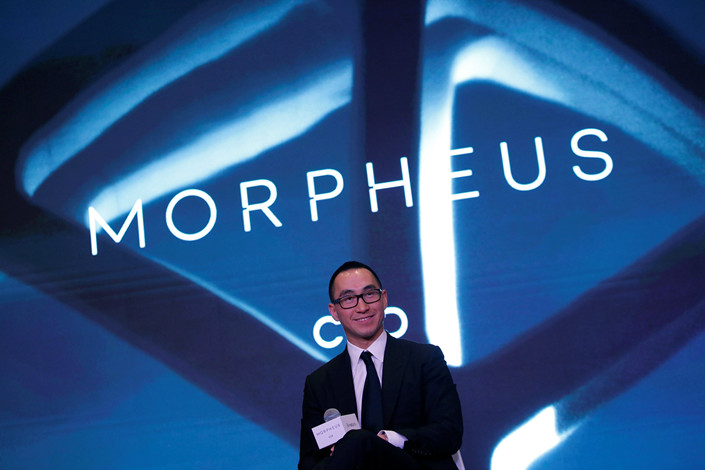 Lawrence Ho, chairman of Macao casino operator Melco, holds a news conference at the City of Dreams resort on May 15, 2018. Photo: VCG

(AFR) — James Packer interrupted breakfast with a small group of journalists at Sydney's Park Hyatt four years ago to dash back up to his room to grab an iPad. He said he had something special to show his guests who had been invited to hear about the gaming mogul's global expansion plans.

The iPad featured a yet-to-be-released short movie directed by Martin Scorsese and starring Brad Pitt, Leonardo DiCaprio and Robert De Niro to promote Crown's global resorts and casinos. The movie, which cost a rumored AU$70 million ($50 million) to make, was typical of Crown's excesses at a time when Packer had global domination in his sights.

Despite the negative press at the time from a public brawl with former Nine Entertainment chief David Gyngell, Packer appeared to be unstoppable.

Over breakfast, he outlined plans to build a global tourism and gaming brand in Crown Resorts Ltd., while expanding his business interests into the technology sector in Israel and elsewhere.

The Chinese territory of Macao and Packer's joint venture there with Lawrence Ho, also the son of a high-profile billionaire, was the centerpiece of his global ambitions as thousands of Chinese high rollers poured cash into the region. Packer has consistently praised China and talked up the potential opportunities for Australian tourism from the world's second-largest economy.

That plan turned sour in October 2016 when Chinese authorities detained 18 Crown employees, including three Australians, for promoting gambling — an activity which is illegal in China. That was the beginning of the end of Packer's China dream, as Beijing's clampdown on corruption and capital outflows took its toll on the Las Vegas-style casinos sprouting up in the former Portuguese colony.

Ironically, the US company now stalking Crown has similar global ambitions. Analysts say the strategy behind Wynn Resorts’ AU$10 billion takeover offer for Crown is to give it a hedge against Macao, where gaming revenues are hostage to shifts in Chinese government policies. Wynn's license is up for renewal in 2022.

Wynn also wants to keep up with its competitors and expand in Asia. It is currently confined to Macao with limited expansion options at a time when rivals like Packer's former partner Melco Resorts, and Sands Corp, are expanding and competing for licenses in Japan, where gambling has just been made legal. While gaming revenues in Macao have rebounded over the last two years, they slipped in March.

Like many before him, Packer learnt the hard way that China is a tough place to do business.

Packer first met Ho, the son of Hong Kong billionaire Stanley Ho who had a monopoly on gaming in Macao for many years, in 2004. Ho was searching for a partner for his City of Dreams casino project in Macao and immediately took a shine to Packer when they were introduced by his father — Australian media tycoon Kerry Packer — in Sydney.

“I guess we are both young people who have very successful fathers and trying to step out of their shadow," Ho said in a 2012 interview.

Publishing & Broadcasting, as the Packer family empire was then known, spent AU$211 million taking a 50% stake in the joint venture in 2004 following a long campaign by the Packers to break into Asia's lucrative gaming market.

Melco PBL Holdings listed on the Nasdaq two years later. Crown Macau opened its doors in 2007 and the company changed its name to Melco Crown the following year. The City of Dreams casino opened in 2009. Crown's global ambitions were at their peak in 2015 when a relaxed Packer hosted a lavish party for hundreds of VIP guests at the opening of his seventh casino, Macao’s Studio City.

“I think the most important thing in a political sense is that Lawrence and I are a model joint venture in how an Australian company and a Chinese company should work. And there are not that many,” Packer told journalists at the time.

A year later, Chinese authorities raided the homes of Crown’s staff in China, confiscating phones and computers and taking them away in the middle of the night. The raids shocked the gaming industry globally and highlighted the risks from Xi Jinping’s anti-corruption campaign which put a stop to excessive spending and authorities turning a blind eye to companies skirting around rules outlawing the promotion of gambling.

Sources involved in efforts to free the detained staff now praise the role Crown played in behind-the-scenes efforts to secure their early release from prison. But the incident hit an embarrassed Packer hard and meant he did not have much choice but to exit the region.

Already under pressure to pay down debt and fund his flagship Barangaroo project in Sydney, Packer ended his 12-year partnership with Ho in late 2016.

“He is selling the family silver,” one well-placed source said of the decision to sell out of Melco at a time when the Macao market was struggling. “This is not erratic behavior though. This is a completely rational and sensible move.”

“Once the spin-off failed, Plan B was always to sell out. No one really knows what the impact on VIP revenues will be and they needed to raise money. The China thing is really worrying.”

If Wynn still buys Crown, as many believe it will, Packer's Asia ambitions could still live on although it will happen under a different name.