By Zhang Qi and Ren Qiuyu 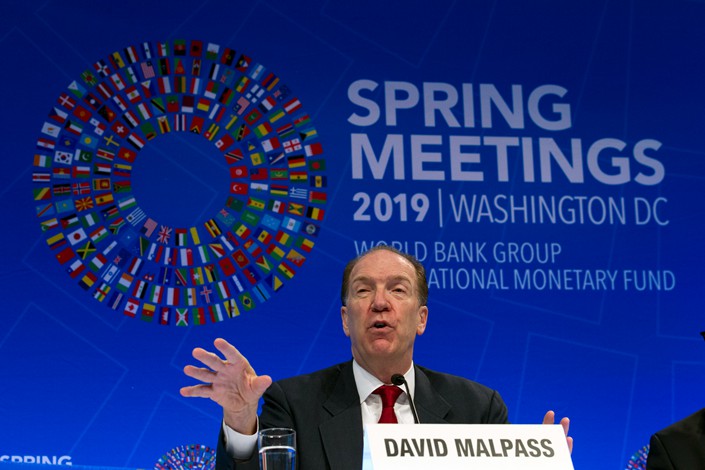 Malpass said that China is naturally evolving from being a major borrower from the World Bank to a smaller borrower and is also becoming a bigger donor and shareholder.

The press conference held at the opening of the International Monetary Fund-World Bank Spring Meetings 2019 on April 11 marked Malpass’s third day in his new position. Before being unanimously elected president on April 4, he was the U.S. Treasury’s undersecretary for international affairs under President Donald Trump, who nominated Malpass for the World Bank post. He has joined trade delegations for negotiations over a U.S.-China trade deal.

The U.S. is the World Bank’s largest stakeholder. Malpass was the only candidate for the position, which opened when the former president, Jim Yong Kim, abruptly stepped down in January.

Malpass’s nomination was met with anxiety in some quarters given his critical stances toward multilateral institutions and specifically the World Bank. In 2017, he told the Council on Foreign Relations that “multilateralism has gone substantially too far — to the point where it is hurting U.S. and global growth.”

He has also been openly critical of China for being the bank’s largest borrower and toward the bank’s cooperation with China on the country’s international global infrastructure building campaign, the Belt and Road Initiative — despite China’s status as an “upper-middle income country” along with countries such as Russia, Brazil, and Mexico.

Since becoming the single nominee for the job, Malpass seems to have softened his stance on China. In February, he visited ten countries, including China, Japan, and South Korea, to meet with high-level officials. Malpass said at the press conference that he and President Xi Jinping “talked in very constructive terms about the relationship,” and said that they “share a common view that poverty alleviation, that shared prosperity are key goals of what the World Bank should be doing.”

He also expressed his “proud” support for the World Bank’s capital increase package that was approved at the 2018 Spring Meetings, which he said was helping the organization to become “even more responsive, efficient, and effective.” The package increased China’s shareholding in the World Bank’s lending arm, the International Bank for Reconstruction and Development (IBRD), from 4.68% to 6.01%, maintaining its rank as the third-largest shareholder behind the U.S. and Japan.

The capital increase also changed the IBRD’s lending rules, which would raise the cost of loans to higher-middle-income countries to avoid excessive borrowing. The World Bank classifies China as a “higher-middle-income country.” Under this agreement, “borrowing by China would fall below a billion dollars by the end of the country program that the World Bank does with China,” Malpass said at the press conference. “That is part of the evolution of the relationship.”

As for China’s foreign projects, Malpass stressed a need for transparency in both debt levels and the quality of projects, adding that he would focus on achieving “breakthroughs where countries that either have a high amount of extreme poverty or too little shared prosperity can do much better.”

At the press conference, Malpass said that the World Bank would strengthen cooperation with other multilateral development banks. The previous day, he had met with the head of the Asian Infrastructure Investment Bank (AIIB) Jin Liqun, where they had “conversations about ways there can be cooperation that achieves very high quality lending programs.” He also met with the heads of the IBRD, the African Development Bank, the Asian Development Bank, and others to discuss how the development banks can cooperate to “meet the resource needs of the challenge,” he said.