The World Bank’s Role in the Transformation of China’s State Sector: Part Two 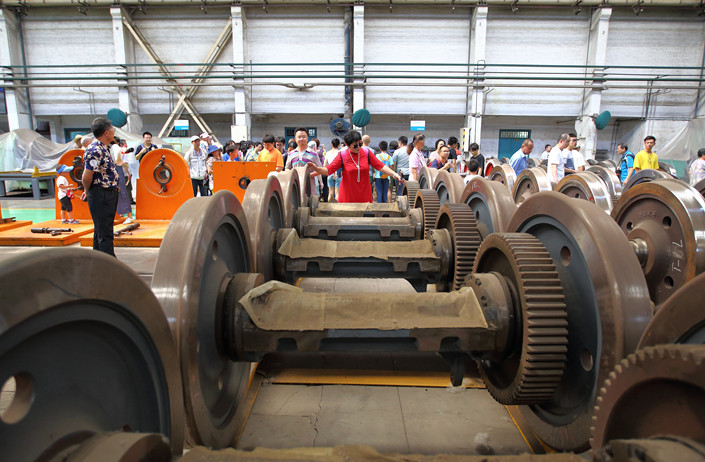 In the past four decades, China has transformed from a Soviet-style planned economy to one in which the market plays an increasingly greater role. As the private sector has flourished, state-owned enterprises have also undergone great changes to adapt to the market economy. Zhang Chunlin, lead private sector development specialist at the World Bank Group’s Trade and Competitiveness Global Practice, describes the role the World Bank has played in helping China’s state sector to transform. Caixin will publish his article in four parts, covering topics including the corporatization of SOEs, the commercialization of state ownership, dividend policy and state capital management. You can read part one here.

In the 1990s, the way the state exercised its ownership rights in SOEs became an issue of increasingly high priority. As one Chinese senior policy maker explained at a joint conference with the World Bank in 1995, the challenge was how to establish agencies that would represent the owner of state-owned assets in SOEs, and how to find an efficient way for the ownership rights of the state to be realized.

This was not surprising, because corporatization of SOEs requires an entity to act as shareholder on behalf of the state. In the absence of a well-functioning institutional framework of state ownership, many SOEs transformed themselves into “enterprise groups” where one traditional SOE was split into two entities: one a wholly-state owned parent company to act as state shareholder, the other an operational subsidiary held by the former. The operational subsidiary was then opened up to non-state investors, including those in the stock market through initial public offerings (IPOs).

In an attempt to further curtail government intervention in SOEs and make them independent market players, a range of line ministries and departments of the government at both the national and subnational levels were abolished in late 1990s. Again, due to the absence of a well-functioning institutional framework of state ownership, the role of the state as owner was weakened as government intervention in SOEs was scaled down, leading to an “emerging corporate governance vacuum” of “insider control.”

The World Bank’s supports in the 1990s maintained a strong focus on the exercise of state ownership. In 1995 it and the now-defunct State Economic and Trade Commission (SETC), which was charged to lead SOE reform efforts nationwide, organized a joint conference on issues and options for China’s SOE reform, in which Chinese policy makers presented their views and raised questions, to which international experts responded with comments and discussions. Among the important policy options discussed were proposals of Jiang Qiangui, Director General of the SETC’s Enterprise Reform Department, on creating separate “managing institutions for state-owned assets” as corporate entities to replace line bureaus and ministries in overseeing the performance of individual enterprises, and proposal of Wu Jinglian, a research fellow at the Development Research Center of the State Council (DRC), that pension funds be allowed to hold shares in SOEs.

The conference was followed in 1997 by a report advising China to strengthen the state's ownership interests through several organizational reforms.

• Simplifying present structures and their component bodies and eliminating layers wherever feasible.

• Reorienting state asset management institutions toward financial instead of administrate management of assets.

• Introducing professional managers and “outsiders” into the system.

The report recognized that in China, the state carries out “shareholder” functions performed by private owners in market economic systems, and in doing so, it faces a tradeoff between maintaining control of SOEs and enhancing their asset values. Fundamentally reorienting SOE incentives toward the market may well require reducing the state's involvement to passive minority ownership of SOEs.

The World Bank had expanded its engagement into areas related to SOE financial performance and restructuring shortly before the Asian financial crisis beginning in July 1997. Two reports were completed in 1996. One, based on missions in 1994 and 1995, focused on SOEs and looked at the need to reduce the borrowing requirements of the SOE sector, so as to contribute to macroeconomic stability. The report recommended a two-pronged strategy: reforming SOEs to improve profitability, which could be expected to increase the share of investment financed by retained earnings, and transferring SOEs to the non-state sector, together with the risks, including through mergers.

The other report put SOE issues in an overall analytical framework that sees the SOE sector, the state-owned financial sector and public finance as three components of government finance overall. This framework made an important contribution to policy discussion in China when the ongoing SOE restructuring was frustrated by a huge amount of non-performing loans that had the potential to drag state-owned commercial banks into crisis, alongside state pension obligations to SOE employees that threatened to destabilize public finance.

The Asian financial crisis proved it to be a particularly timely discussion. Shortly after the crisis, China created four assets management companies to dispose of non-performing loans of state-owned commercial banks, and the World Bank provided its technical advice to some of them. In 2000 it further engaged with the Chinese clients in this area and provided technical advice on SOE bankruptcy, supporting China’s efforts in drafting a new bankruptcy law.

As large SOEs were corporatized some listed on the nascent stock market, while small ones were privatized. Corporate governance quickly arose as a reform priority, to which the World Bank Group responded with a joint study completed with the International Finance Corporation (IFC) in 2001. Launched by then-President James Wolfenson in early 2002, it focused on short to medium-term corporate governance issues that arose during the transformation of ownership in the Chinese state enterprise sector.

• Alleviating the negative impact of dominant state ownership on market discipline and on the regulatory capacity of the state.

• Building an institutional investor base.

• Strengthening the role of banks in corporate governance.

Many of the specific recommendations were consistent with recommendations made in previous World Bank studies, particularly reports in 1997 and 2000. The study was completed in collaboration with the DRC, a partner that the World Bank has closely worked with since then in its engagement on SOE reform.

In the fall of 2002, when the Chinese authorities made their final decision to create a centralized ownership agency, the World Bank contributed to its design. The decision was made in the CPC 16th National Congress in 2002 and the creation of the entity, later named the “State-owned Assets Supervision and Administration Commission” (SASAC), was approved by the National People’s Congress in March 2003.

In a policy note completed in September 2002 that addressed the question of how the Chinese state could exercise its ownership rights in a more effective way, the World Bank advised China to focus on large SOEs and make the efficient use of state capital a central objective. It went further to recommend two specific instruments to this end: the concept of economic value added, and the SOE statement that specifies its performance goals.

In view of the global experience and the fragmentation of authority and diffusion of responsibility for Chinese SOEs, the note argued in favor of the creation of a single government agency that specializes in exercising state ownership rights. It further emphasized a number of key requirements that would make the ownership agency work, including, for example, that it should be commercially focused and professional, and exercise its rights through the normal means available to shareholders such as annual shareholder meetings and SOE board appointments.

The messages of the policy note were disseminated to the authorities in the second half of 2002 through a partnership with the DRC, and the note itself was delivered to a task force that was responsible for developing the structure of the SASAC in early 2003. In September 2003, a follow-up policy notes provided more detailed technical advice on implementing a “modern capital management system” as well as “ownership transformation,” or privatization, of some SOEs.

The establishment of the SASAC in 2003 marked the end of China’s second generation of SOE reform. The SASAC adopted a strong focus on efficiency of state capital use, in the name of “state asset value preservation and appreciation.” Corporate performance agreements with SOE management were used as instruments to set clear and measurable performance targets, on which a monitoring and evaluation system was established that linked managerial performance with remuneration and appointment. A great deal of effort was also made through pilot programs to promote board governance and market-based recruitment of senior executives.

This article is part two of a four-part series on the World Bank’s role in transforming China’s state sector. You can read part one here, part three here, and part four here.