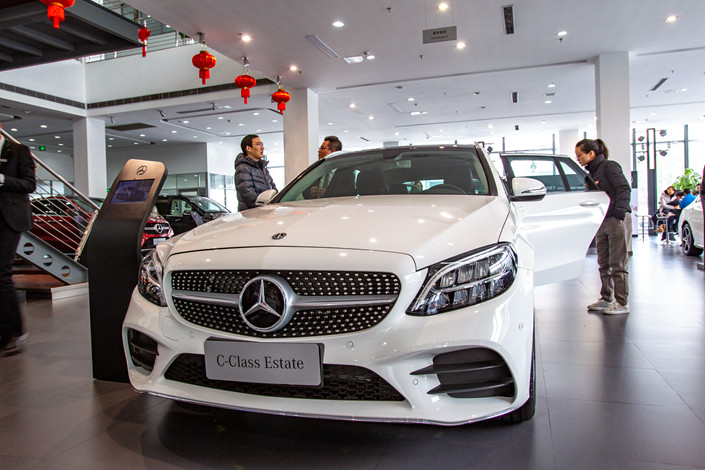 Customers view a Mercedes-Benz at a dealership in Shanghai on Feb. 23, 2019. Photo: IC

A dispute involving a Mercedes-Benz dealership and a local customer has put the German luxury carmaker on the hot seat and brought its love-hate relationship with one of its oldest Chinese partners into the spotlight.

Beijing Mercedes-Benz Sales Service Co., a joint venture between Daimler AG and BAIC Motor, said Tuesday that it suspended a local sales franchise in Xi’an city in the northwestern province of Shaanxi after a customer complaint about the dealership’s service went viral online.

In a video clip circulated since last week, the customer complained that a 660,000 yuan ($98,421) car she recently bought from the Xi’an dealership was leaking oil and that she was subsequently treated poorly. The customer also alleged that she was forced to pay a “financial service fee” of 15,000 yuan to the dealership when she bought the car.

The episode ignited heated discussion among Chinese internet users of big multinationals’ after-sale services and spurred the country’s banking regulator to initiate an investigation of the legitimacy of the alleged financial service charge.

The matter also brought to the surface a long-simmering dispute involving Daimler, BAIC and LSH Auto (Hong Kong) Ltd., Daimler’s original Chinese distribution partner going back to 1986. Frictions between Daimler and LSH have emerged since 2005, when the German automaker set up a new China venture with state-owned BAIC Group ― Beijing Mercedes ― to start manufacturing in China.

Beijing Mercedes said Tuesday in a statement that it reached an agreement with the customer and launched an investigation of the Xi’an dealer. If any illegal practice is found, the dealership will be terminated, the company said.

The dealer, Xi’an Lizhixing Automobile Co., has a poor track record since it was established in 2012. Over the last few years, Lizhixing has been involved in 21 lawsuits, most related to consumer rights, according to public records. Lizhixing is controlled by Mandarin Star Holding Ltd., a subsidiary of LSH Auto.

A person close to the matter said there are widely known flaws in Lizhixing’s business operations, but Mercedes-Benz has found it difficult to intervene.

The partnership between Mercedes-Benz and LSH Auto started 33 years ago when Mercedes-Benz registered its venture in Hong Kong for China business and granted LSH Auto the exclusive right to sell imported Mercedes cars on the mainland. In succeeding years, LSH Auto helped Daimler to break into the China market.

In 2006, Mercedes-Benz relocated the Hong Kong venture to Beijing and renamed it Mercedes-Benz (China) Automotive Sales Co. (Mercedes China), in which LSH Auto had a 49% stake. Mercedes China held firm control over sales of imported Mercedes in China and competed with sales of Beijing Mercedes.

Mercedes-Benz has since initiated tough negotiations with BAIC and LSH Auto. In 2012, the company agreed to integrate the sales networks and set up a new company to manage sales, in which LSH Auto no longer holds a stake. But LSH Auto still retains control of a large number of Mercedes-Benz dealers in China.

People familiar with the matter said that after the Xi’an incident, Beijing Mercedes demanded that LSH Auto to make a public apology for the subsidiary but was rejected. Talks between the pair broke up unhappily, sources said.

People close to Beijing Mercedes said the company is collecting information to assess the Xi’an dealership. LSH Auto is preparing to fight back by raising questions about the quality of Mercedes cars, a source said.