Could Foxconn Founder Terry Gou be Taiwan’s Next Leader? 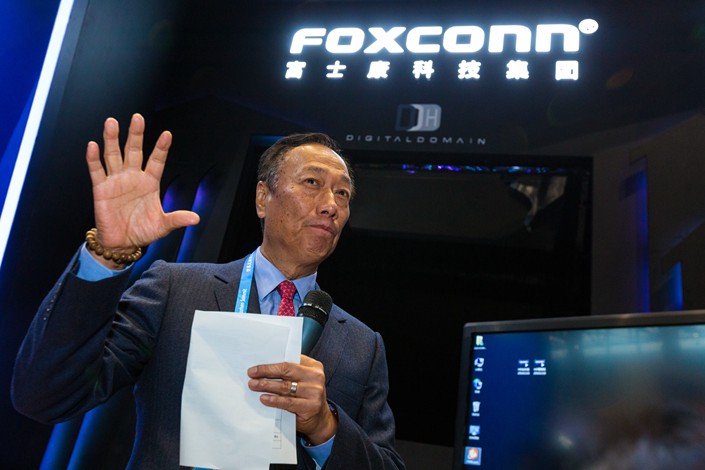 Terry Gou, founder and president of contract manufacturer Hon Hai Precision Industry Co. Ltd., made waves last week when he said that he would be running for the opposition’s nomination for the next Taiwan elections.

Yet the announcement was not totally out of the blue — in January, Gou had opened various social media accounts and organized a social media team. He began to soften his personal image and post frequently about political and economic issues both on and off the island.

The 68-year-old billionaire has close ties with the Chinese mainland and presents years of business experience which could appeal to Taiwan’s voters. Others are less optimistic about his chances, pointing to his fierce temper, competition from other well-liked candidates, and younger generations’ detachment from the Chinese mainland.

The opposition Chinese Nationalist Party, also known as the Kuomintang (KMT), is expected to select their nominee to run for the top leadership position in July. If selected to represent the party in the January 2020 election, Gou will face off against the Democratic Progressive Party (DPP) candidate, likely to be current leader Tsai Ing-wen. The DPP suffered a blow in local elections last November, losing mayoral races in key cities on the island.

In 1949, KMT forces fled to the island of Taiwan at the end of a civil war while the Communist Party took over the Chinese mainland and founded the People's Republic of China. The Communist Party still claims Taiwan as part of China’s territory. The KMT is generally seen to support closer ties with the Chinese mainland, whereas the DPP pushes for Taiwan’s independence.

Gou’s business success and strongman style — along with his deep pockets — could make him a solid candidate for the KMT. He has long been a supporter of the party. In 2016, he loaned it NT$45 million ($1.45 million) in his mother’s name when its assets were frozen during an investigation launched by Tsai’s administration.

But for Gou, winning the favor of the upper echelons of political circles was just an extra boost. His real capital comes from the entrepreneurial image he has cultivated over the last 20 years as the leader of Hon Hai, which trades as Foxconn, and his personal story.

Foxconn’s success has been a boon for the island’s economic development and Gou’s rise from owning a small plastics factory to working with Apple, Amazon, and other major tech companies is in itself the epitome of Taiwan’s self-proclaimed destiny.

Of the declared KMT candidates, Gou’s position on cross-strait relations is one of the more clear-cut: stability in the Taiwan Strait and accommodating the growth of a cross-strait economy. He also advocates for Taiwan to stop buying weapons from the United States and instead make it an economic and technological partner.

“I hope my mother can see my grandson get married,” he said in the days before he announced his candidacy. “If we want to have five generations together, we need a stable and peaceful environment.”

Taiwan’s defense should not depend on the U.S., but rather on “peace,” he declared.

Gou’s stance has been highly praised by the state media on the other side of the Taiwan Strait.

“Compared with the general Kuomintang politicians, Gou Tai-ming’s words reveal a higher level of insight, courage and structure,” read a commentary on a WeChat account of the official People’s Daily’s overseas edition, which used Gou’s Chinese name. The article said Gou is the first candidate in Taiwan’s elections to openly challenge the U.S. security umbrella. The nationalist paper Global Times also endorsed Gou in an editorial shortly after he announced his candidacy.

Gou has also maintained a close relationship with China’s leaders, with multiple public meetings — including with President Xi Jinping — and Foxconn conducts billions of dollars of business on the mainland.

Additionally, his business expertise may be welcomed amid a struggling economy on the island. Tsai’s “New Southbound Policy,” which sought to reduce dependence on exports from the Chinese mainland and stimulate five “emerging industries” has seen few results since it was introduced three years ago. The economic logic of the “Terry Gou Story” — merging a mainland production base, American customers, and the island’s own research and development and large-scale technology processing industry — could be a convincing narrative for an election campaign.

However, not all are convinced that he will win the KMT’s nomination. He is known for his tantrums, and younger voters — who tend to support the DPP and Taiwan independence — may not be impressed with his deep business ties with the Chinese mainland. He lacks political experience, and some are concerned that he will not totally relinquish his control of Foxconn. In a statement last week, Foxconn said Gou would “continue to provide strategic direction and guidance” to the company but would “withdraw from daily operation.”

As Foxconn gained ground in the early 2000s, so too did stories of the company’s poor treatment of employees. The company has often made headlines due to arbitrary firings, poor living conditions at its manufacturing plants, underpaid and overworked employees, and even suicides.

Gou is also known for his angry outbursts, exemplified the day before he announced his candidacy. When a DPP politician allegedly “didn’t even look at me” while briefly answering his question at a panel, Gou’s temper flared and he stormed out of the conference. The politician later addressed the issue, saying that she did not deliberately try to disrespect him, but Gou was not placated. The incident sparked online criticism of Gou.

In March, Gou said that a Microsoft patent lawsuit against his company was a “personal attack” and claimed the lawsuit was an attempt to extract royalties from one of Foxconn’s subsidiaries.

Bruce Jacobs, professor emeritus at the Chinese studies department of Australia’s Monash University, said that even if Gou were to win the KMT nomination, “the likelihood of him being elected is low,” citing younger generations’ disillusionment with the opposition party which lost the 2016 leadership election by a nearly two-to-one margin.

Pang Chien-kuo, a professor at a graduate institute for Chinese mainland studies in Taiwan, said that Gou’s chances are also highly dependent on another potential KMT candidate joining the race. “If Han Kuo-yu decides to enter the primary election, Han has a better chance of winning (the nomination),” he told Caixin, referring to the current mayor of Kaohsiung in southern Taiwan. Han has won wide support among the electorate and within the KMT when he won a mayoral election in the DPP-stronghold of Kaohsiung in May 2018, and is widely considered to be Gou’s biggest competition — if he chooses to run.

According to an April 22 survey from the United Daily News, a Taiwan-based pro-KMT newspaper, Gou ranked second in popularity among possible KMT candidates with 19%. Han came first with 26%.

Jacobs warned that mainland support could end up hurting any KMT candidate, as any endorsement may end up helping the DPP, especially among young voters.

While it remains unclear which candidate will poll the highest among voters, Terry Gou has already been a surprise jolt to Taiwan’s political race.