By Isabelle Li and Wang Luyao 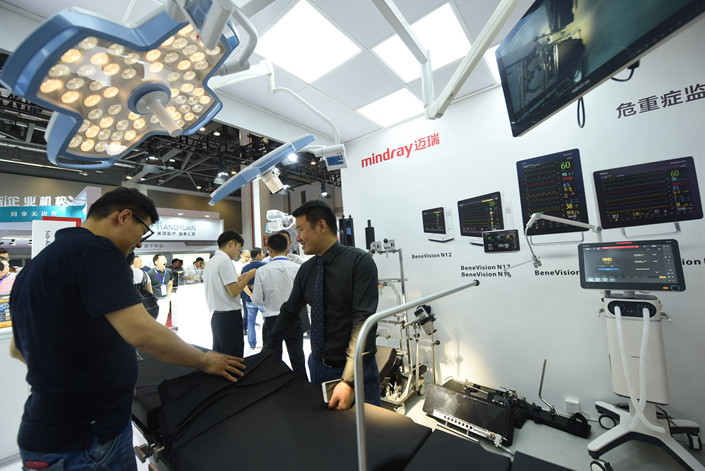 Mindray’s net profit attributable to shareholders surged by 43.65% to around 3.7 billion yuan ($550 million), while its revenue grew 23.09% to a total of around 13.8 billion yuan in 2018, according to its first annual financial results (link in Chinese) since relisting on the Chinese mainland.

Medical instruments remain at the heart of Mindray’s business, contributing 99.69% of its revenue, the Tuesday report showed. Gross margin was around 66.57%.

Mindray is getting an increasing amount of sales from its home China market as Beijing rolls out a new national medical system to replace the old one of cradle-to-grave health care provided by former state-owned work units, which were China’s main employers during the socialist era.

Just 43.31% of its sales were made overseas last year, the third year in a row that number has dropped.

Trade tensions between China and the U.S. played a role in this, as several products it exports to the U.S. now face tariffs imposed by the White House last year. Its North America business grew 2% to 1.5 billion yuan, much slower growth than in some other markets.

Mindray is also facing nearly 10 ongoing lawsuits, most of which are patent disputes with rivals including Edan Instruments, Dymind Biotech and Siemens. The total compensation requested by the accusers adds up to over 12 million yuan, according to the annual release.

Concerns were expressed about the potential state of the company’s finances after it terminated hiring agreements with over 250 soon-to-graduate students at the end of December. The company apologized in January (link in Chinese).

Founded in 1991 in the southern boomtown of Shenzhen on the Hong Kong border, Mindray was one of China’s earliest companies to list in New York when it made an initial public offering (IPO) there in 2006. But like many of its Chinese peers, the company felt its shares were undervalued by U.S. investors and it privatized in 2016 in a deal that valued the company at $3.3 billion. A funding round shortly after that delisting valued the company sharply higher at about 54 billion yuan, or $8.5 billion, according to a private equity source.

It re-listed on China’s Nasdaq-style ChiNext board last October, raising 5.75 billion yuan. Its market value has since stabilized at around 150 billion yuan, up nearly 100 billion yuan since its IPO.

Analysts suggest that investors believe China’s medical-device market still has a strong potential for growth. According to statistics issued by the China Association for Medical Devices Industry, China’s market for medical equipment was worth 445 billion yuan in 2017, and it is expected to grow by 15% to 20% annually over the next few years. In addition, the ratio of drug-to-medical device sales in China for last year was about 3:1, far higher than the approximately 1:1 ratio seen in the United States.