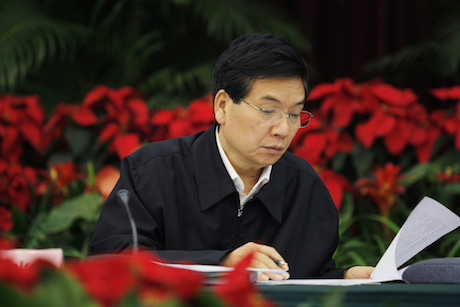 Another so-called “tiger” has fallen from grace in the central government’s sweeping anti-corruption campaign.

Qin Guangrong, former Communist Party chief of Southwest China’s Yunnan province, is now under investigation on suspicion of “serious violations of laws and discipline” after giving himself up to the Central Commission for Discipline Inspection, the ruling party’s top anti-graft watchdog announced late Thursday.

The 68-year-old former provincial head worked in the government of his home province of Hunan for over two decades before transferring to Yunnan in 1999. Qin was made Yunnan’s governor in 2007 before being promoted in 2011 to provincial party secretary, the de facto leader of the province. He remained in that position until October 2014.

Qin’s predecessor, Bai Enpei, who served as Yunnan’s party chief from 2001 to 2011, was sentenced in 2016 to death with two years reprieve for taking bribes and possessing a large amount of assets that could not be accounted for.

Related: Is Taking a 100 Million Yuan Bribe the New Ticket to a Life Sentence in China?