Is Taking a 100 Million Yuan Bribe the New Ticket to a Life Sentence in China? 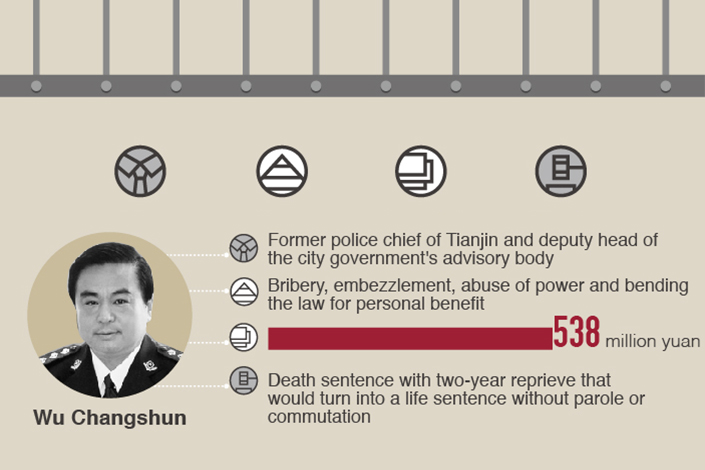 (Beijing) — The decision by Chinese courts to hand out life sentences to three top officials, including the former head of the statistics bureau on Wednesday, has Chinese media buzzing about whether 100 million yuan in ill-gotten gains was “the unofficial benchmark to identify the extremely corrupt.”

Fifteen senior officials have been convicted or charged with taking bribes or embezzling public funds to the tune of 100 million yuan or more as of May 31 under China’s ongoing anti-corruption campaign, court documents showed. Many of them have received a life sentence, prompting media speculation that owning illicit assets worth 100 million yuan was the new de facto threshold for the strictest punishment for top officials implicated for graft.

But Chinese law doesn’t specify such a benchmark and penalties for convicted officials aren’t simply tied to the amount of ill-gotten gains. They can differ based on how far they’ve cooperated during the investigation.

Wang Baoan, former head of the National Bureau of Statistics (NBS), was sentenced for life for accepting 153 million yuan ($22.5 million) in bribes, according to a verdict released by the Zhangjiakou Intermediate People’s Court in Hebei province on Wednesday.

Wang, 53, was among eight senior party and government officials to be convicted for corruption on that day.

Two others in the group — Lu Ziyue, former mayor of Ningbo in Zhejiang province and Chen Xuefeng, former party secretary of Luoyang in Henan province — also had ill-gotten gains worth over 100 million yuan and were jailed for life.

More than 70 high-flying officials from around the country have fallen from grace after Xi Jinping launched a major anti-graft crackdown in November 2012.

Former Tianjin police chief Wu Changshun was the “fattest tiger” netted by the campaign with a whopping 538 million yuan in illicit gains including cash, jewelry and a painting collection with pieces from some of the best-selling contemporary Chinese artists.

Wu, who last served as a vice chairman of the city’s government advisory body, the Tianjin People’s Political Consultative Conference, was handed a death sentence with a two year reprieve by the Zhengzhou Intermediate People’s Court on May 27.

Wu’s suspended death penalty may turn to a life sentence after the two years expire, the court said, but given the severity of his crimes, he will not be eligible for parole or a commutation of his sentence.

This made Wu the second senior official to receive the harshest punishment given in a bribery case since late 2012.

Bai Enpei, former party secretary of the southwestern province of Yunnan, was sentenced to death with a two-year reprieve in October 2016. A court in Henan province found him guilty of taking 247 million yuan in bribes. Bai’s death penalty could also be turned to a life sentence without parole or a chance for a further commutation, according to court documents.