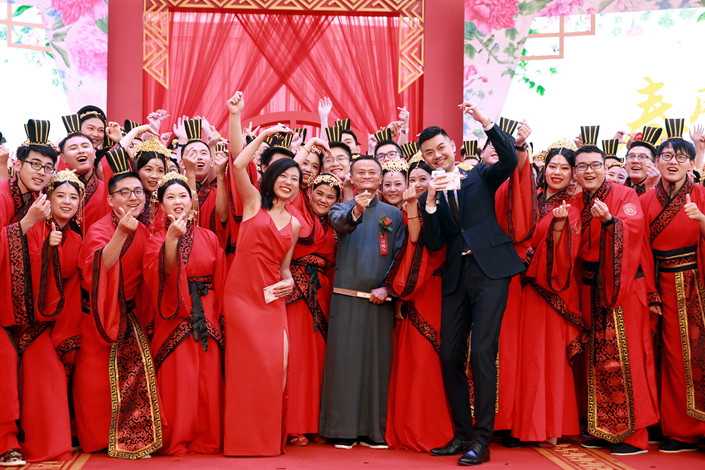 Last week, Alibaba founder Jack Ma came under fire for making a joke at a group wedding, a play on the “996” work culture that he defended last month. “996” refers to the expectation at tech companies for employees to work from 9 a.m. to 9 p.m., six days per week.

“At work, we emphasize the spirit of 996. In life, we should follow 669,” Ma told 102 couples at Alibaba’s annual mass wedding to celebrate Ali Day on May 10. He explained that couples should have sex six days per week, emphasizing “endurance,” which is a homophone for the number nine in Chinese.

Disseminated through Alibaba’s official accounts online, the comment stirred heated debate on the internet. Below, author Liu Xingyu of the Queer Workers Service Center argues that Ma’s joke is a reflection of the pervasive gender harassment in China’s tech sector.

The work environment at Alibaba and other tech companies is no secret. At the annual party of a Tencent division in 2017, employees had to play sexual games. Xiaomi has also used sexually suggestive slogans to sell its phones. Such sexual elements are not uncommon in advertisements and even in meetings in China’s tech industry.

Is it a joke or “sexual harassment”?

According to a 2018 report on sexual harassment by the National Academies of Science, Engineering and Medicine (NASEM), sexual harassment can be divided into three main categories: sexual coercion, unwanted sexual attention and gender harassment.

The most easily perceived and understood are the first two categories. Gender harassment, which refers to “verbal and nonverbal behaviors that convey hostility, objectification, exclusion or second-class status about members of one gender,” is often not regarded as an error because it usually takes on a more obscure or abstract form. Research, such as a 2013 study by psychologists K.J. Holland and L.M. Cortina, has pointed out that gender harassment is the most neglected of all types of sexual harassment. Sexual allusions at inappropriate occasions and advertisements with sexual flavor are typical examples of gender harassment.

Some scholars have also pointed out that sexual harassment can also be environmental, meaning that it does not need to target a person or group of people by name. Such an environment helps create a culture that normalizes sexual harassment and minimizes major incidents, which can then be disseminated outside the environment via internet platforms.

Jack Ma said that “669,” or “six days, six times, the key is endurance” at an internal company event, which was then used as publicity to highlight the founder’s wit. But this is undoubtedly, obviously gender harassment. Brave pursuit of lust is regarded as commendable. Any interaction with sexual connotations must respect the subjective wishes of the other party, rather than presume to know the other party’s ideas. If the act of sexual harassment is not only ignorant but is a form of self-righteous humor, it is disturbing and infringes on the rights and interests of others. Looking carefully at such behavior, the problem may run even deeper.

In addition to the “669” comment, Jack Ma also said that “Alibaba wants to create a large number of gods and goddesses. What is a god? He has the spirit of 996 in work, and in life achieves the hard 669 target. What is a goddess? She has the ability to help and supervise men to achieve the soft power of 996 and 669.” He also said, “The key to a happy marriage is to make good use of ‘ding ding,’” a slang word for a man’s genitals.

It is not difficult to see that the entire speech is directed toward men. This is not the sole example. In one game at the Tencent dinner, male employees held water bottles between their legs and female employees had to kneel and open the bottle cap with their mouths. One company even recruited female “motivators” to relieve male programmers’ boredom and give massages. In these instances, women undoubtedly appear as objects.

There are many common stereotypes and assumptions about women in the workplace. For example, that a young, professional and enterprising woman may have inappropriate relations with her superior. Older women in high-level positions are assumed to be obsessed with internal politicking. These stereotypes are so entrenched that a considerable proportion of Chinese women believe that they themselves are not suitable for leadership positions, according to famed Chinese sociologist and sexologist Li Yinhe.

This set of stereotypes is not determined by the physiology of men and women, but is in fact caused by society and culture. In today’s diversified world, the phenomenon of “breaking gender norms” is increasingly common, and gender stereotypes are becoming more and more outdated. Unfortunately, a considerable number of people still believe in such stereotypes.

In 2017, Alibaba Cloud Research released a report on programmers in China, which showed that women make up only 7.9% of Chinese people engaged in programing and development work. China’s internet industry is dominated by men. More seriously, male developers focus on the high-paying backend, while the few female developers focus on the lower-paying front end in a phenomenon known as “occupational gender segregation.”

Even though the world’s first programmer was a woman and the programming world was dominated by women in the 1950s and 60s, the stereotype for programmers today is balding men in checkered shirts. Nathan Ensmenger, a science and technology historian, argues that gender boundaries in a profession are set by educational or technical thresholds or other soft indictors. Whether it’s the stereotype that “women programmers are generally not good,” or the timidity and low self-confidence that this stereotype causes in women, or the extremely unfriendly environment toward women in the field, women are finding it increasingly difficult to enter the profession.

In the eyes of most programmers, women are mothers, wives, objects to pursue and playthings to relieve boredom. Their deepest contribution to society is to “help and supervise the realization of 996,” to marry, and to have children. It is this male-dominated environment that allows all kinds of vulgar games to continue unimpeded. The games appear enjoyable, but they actually reinforce all kinds of gender segregation and oppression in the company.

Perhaps the most absurd irony is that internet companies such as Alibaba that embrace “change and innovation” as their core values still stubbornly cling to outdated gender concepts.

Liu Xingyu is a member of the Queer Workers Service Center, a nongovernmental organization based in Suzhou, East China’s Jiangsu province.