China Tells Farmers to 'Grab Crops From the Mouth' of Armyworms 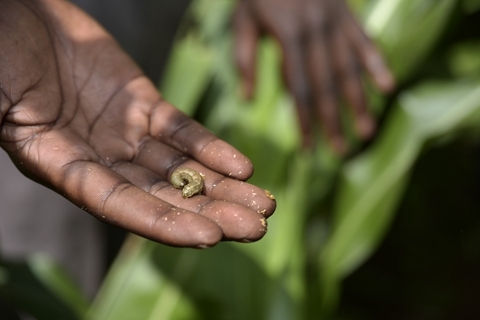 First it was swine fever — now Chinese farmers are racing to fight outbreaks of an invasive insect pest called the “Fall Armyworm” that threatens their crops.

Signaling the danger posed by the innocuous-looking grub to China’s corn, cotton and soybean industries, a major pest prevention center under the country’s Ministry of Agriculture and Rural Affairs (MOA) on Tuesday warned of a "visible increase" in the pace of the invasion, and urged farmers to “grab crops from the mouth of the pest.”

The insects were first detected on the Chinese mainland in January in the southwestern border province of Yunnan. They are believed to have passed from Southeast Asia into China, where they have ravaged around 1,080,000 mu (720 square kilometers) of farmland in 13 provincial-level regions.

Those figures, from the MOA unit, are far higher than the 127,000 mu figure given in a U.S. government report last week.

The pest, which is most active in southern China, is expected to spread north as corn grows and temperatures increase into the summer. There are concerns the insects will take root in China and reproduce, the MOA unit’s notice said.

The government has established an emergency response.