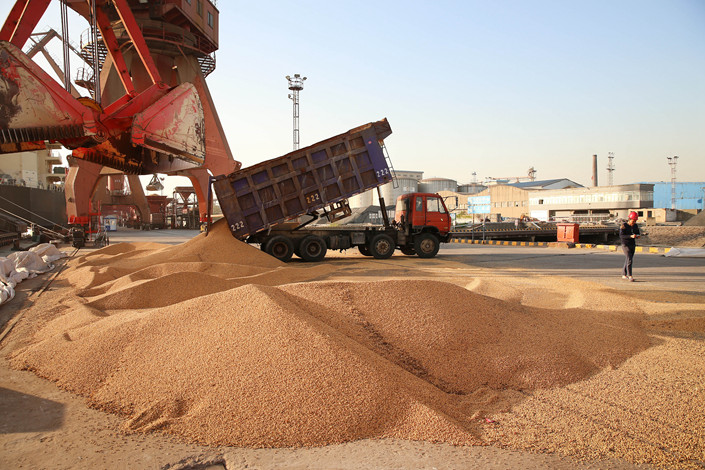 Imported soybeans are unloaded in the port of Nantong, Jiangsu province on April 9. Photo: VCG

After 18 months without an approval, China’s agricultural ministry allowed (link in Chinese) the import of five new genetically modified (GM) varieties of rapeseed, maize, and soybeans from the United States and Canada.

Amid trade talks with the U.S. earlier this week, the Ministry of Agriculture and Rural Affairs (MOA) announced it had approved the import of two GM products from DowDuPont Inc., DP4114 Qrome corn and DAS-4406-6 soybean (Englist E3), and one GM soybean developed by Bayer Crop Science and Sygenta, now held by German company BASF. The ministry also approved BASF’s RF3 canola and Monsanto’s MON 88302 canola.

After the announcement on Tuesday, the Canola Council of Canada released a statement applauding the decision. “The approval of new seed innovations will increase Canada’s canola supply and is important for providing China a secure and predictable source of grain and protein,” the statement said. China is the top market for Canadian canola exports.

Under Chinese rules, GM crops can be imported only after passing time-consuming safety assessments and receiving an import permit from the MOA. The approvals are valid for three years, but the approvals process is long and slow. Two of the products approved this week had been awaiting approval for six years.

Insiders at American GM companies told Caixin that China’s slow and opaque approval process had delayed the commercialization of varieties that they spent vast resources researching and patenting. Since China is the world’s largest importer of GM soybeans and canola, many American farmers will not plant varieties that have not been approved by the Chinese authorities, compounding the problem.

According to a Reuters report, the approval of DowDuPont’s GM soybean will have a major effect on Monsanto’s grip on the U.S. GM soybean market. The effectiveness of the Monsanto beans’ resistance to weed-killer glyphosate has waned as weeds develop a tolerance to the chemical. DowDuPont had postponed its launch of the seeds while waiting for China’s approval. Now that the Ministry of Agriculture has approved them, the company will be able to launch its seeds in the U.S. as well.

China’s Ministry of Agriculture recognizes that some GM crops are safe and has approved the import of such crops, typically for use in animal feed. China imports large quantities of GM soybeans and corn from the United States, Brazil, and Argentina.

The approval of the Canadian rapeseed varieties came as a result of the China-Canada Economic and Financial Strategic Dialogue in November 2018, when Canada pushed for more timely approvals of biotechnology products of great significance for bilateral trade. The ministry’s decision comes at a crucial time for American farmers as they decide what crops to plant for the upcoming growing season.

However, the ministry has said that China’s GM industrialization process follows a strict “3F curve,” which includes the three stages of ‘Fiber, Feed, and Food.’ Currently, no GM maize, soybean, or rice varieties have obtained licenses for production and operation in China.