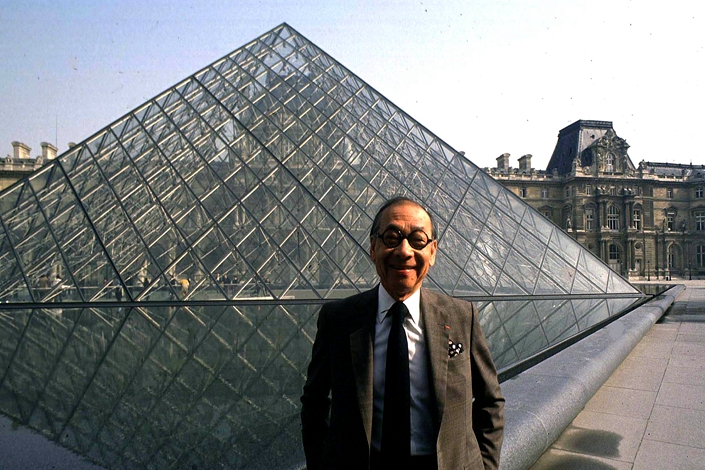 I.M. Pei is seen next to the iconic glass pyramid of the Louvre in Paris, which was completed in 1989. Photo: IC Photo

Celebrated Chinese-American architect I.M. Pei, who famously designed the Louvre Pyramid in Paris, died Thursday in the U.S. at the age of 102.

Pei in 1983 became the first Chinese laureate of the Pritzker Architecture Prize, which is considered the field's highest honor.

Known for his creative use of the modernist style in combination with natural elements and open spaces, Pei dedicated more than half a century to architecture and designed some of the world’s iconic buildings.

In addition to the once-controversial glass pyramid for the Louvre in Paris completed in 1989, Pei designed the Bank of China Tower in Hong Kong, the National Gallery of Art East Building in Washington, D.C, the Rock and Roll Hall of Fame in Cleveland, the Fragrant Hills Hotel in Beijing, and, more recently, the Suzhou Museum in East China’s Jiangsu province.

Born in southern China’s Guangzhou on April 26, 1917, Pei moved with his family to Hong Kong in 1918, where he spent most of his childhood and studied at St. Paul College.

In 1927, when his banker father was appointed head of the Bank of China’s Shanghai branch, Pei moved again with his family to the metropolis, where he lived until 1935, when he moved to the U.S. for his higher education.

Pei was first enrolled in University of Pennsylvania’s architecture school in 1935, but quickly transferred to the Massachusetts Institute of Technology in Boston where he graduated with a bachelor’s degree in architecture in 1940. He furthered his studies in architecture at Harvard and received his master’s in 1946, teaching at the college for two years after graduating.

In 1948, I.M. Pei joined New York architecture firm Webb and Knapp, run by real estate magnate William Zeckendorf. After seven years working for Zeckendorf, he established his own firm in 1955, which took on work from all kinds of projects.