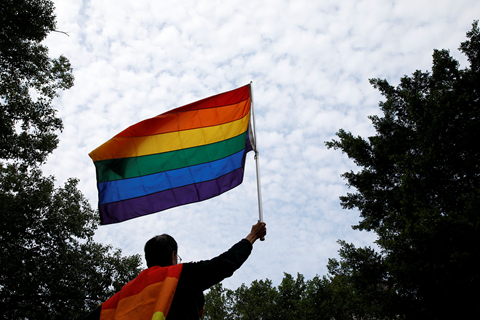 Taiwan’s legislature passes a law legalizing same sex marriage, becoming the first in Asia to do so. Photo: VCG

In a first for Asia, Taiwan legalized same-sex marriage on Friday, which as it happens is also the International Day Against Homophobia, Transphobia and Biphobia.

Legislators in Taiwan voted in favor of a bill allowing same-sex couples to form “exclusive permanent unions” with a clause that states same-sex couples would be able to “register for marriage” at household registration agencies.

Same-sex couples will be able to register for marriage after May 24, the government body that oversees home affairs announced in a Facebook post (link in Chinese).

In 2017, Taiwan’s top judicial body (link in Chinese) ruled that it was “unconstitutional” to restrict same-sex couples from getting married. It gave the legislature two years to amend the law accordingly, and set May 24 as a deadline for the changes.

Following the passage of the bill, Taiwan leader Tsai Ing-wen congratulated the LGBTQ community on Twitter and said that “we took a big step towards true equality” with a hashtag #LoveWon.

Tens of thousands of LGBTQ rights supporters also gathered outside the legislature in Taipei on Friday as the legislature voted on the bill. “I’m deeply moved,” said Liu Tzu-wei, who was waiting for the vote outside in the rain. “It’s really emotional to see my gay friends finally have the right to get married.”

Joseph, a 26-year-old gay graduate student in Taipei, waited outside the legislature with his mother Ann. They both preferred not to reveal their full names. It was the first time they attended an event supporting gay rights since he came out to her in 2015. “The rain was getting quite heavy, but everyone was still very hyped up and cheering,” Joseph told Caixin over the phone, adding that he was glad that his mom volunteered to come with him.

“I have to come to support my own child,” Ann said over the phone. “I care more about whether he can find someone to spend the rest of his life with. I can’t take care of him forever, you know,” she said in a shaky voice.

Taiwan has come a long way on LGBTQ rights. The top judicial body’s 2017 ruling triggered a public backlash, which was followed by a series of “referendums” held at the end of 2018. The results showed that the majority of the voters were against same-sex marriage and only supported drafting a special law rather than amending the Civil Code for same sex couples. The bill’s passage on Friday was proposed by Taiwan authorities, which suggested setting up a special law to fulfill the requirements of the top judicial body’s ruling.

Taiwan’s latest progress on same-sex marriage also sparked discussion on the Chinese mainland. However, the current bill does not specify if a cross-Strait same-sex couple (with one from Taiwan and the other from the mainland) will be able to get married under the new law. It remains unclear how relevant laws and rules will play out in that regard, said Zhu Bao, a lawyer in Beijing who has been involved with several LGBTQ-related cases.

A number of celebrities also voiced their support online. “Congratulations! Everyone deserves happiness,” Jolin Tsai, a popular Taiwan singer, said on Facebook (link in Chinese). A-mei, a Taiwan singer, also posted on Facebook a photo of a huge rainbow flag (link in Chinese) she showcased at her concert, accompanied by the caption “I cried when I saw the news. You’ve come a long way and can finally be proud of who you are. I’d like to hug each one of you, my dearest heroes.”