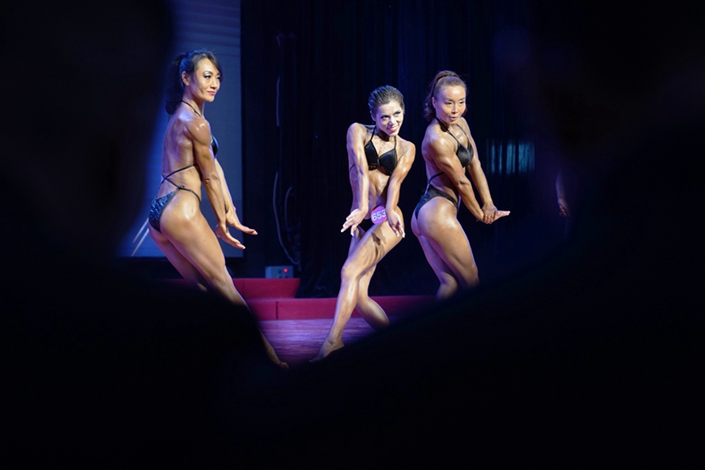 At the Henan provincial bodybuilding competition on May 8, competitors pose to best show off their muscular development and lean physiques. Photo: Cai Yingli/Caixin

“Once registration for these two competitions is over, I want to drink a barrel of water,” said one contestant Shi Bin as she practiced a few poses. “I’m going to have a huge meal!” Chen Liping, another contestant, added.

In order to maintain the leanest possible appearance for the four-day provincial-level bodybuilding competition in Central China’s Henan province, contestants stay as dehydrated as possible. The women begin strictly controlling their water intake two months before the competition, while not letting up on their demanding workouts, which get even tougher as the competition nears. Even a few careless sips of water can cause subtle, undesired changes in body shape.

Shi, the 48-year-old third-place winner, has plans to become a fitness trainer. She began bodybuilding only three years ago, transforming within just two years from an amateur to a serious competitor. “If she had met me a few years earlier, she would have even greater success than she has now,” her coach Cheng Huaqing said with a sigh.

Shi has worked hard to achieve her muscular physique, however to many women, this is far from desirable. At the gym, women trying to lose weight will often point to Shi and say, “I want to lose weight and be thinner, but I don’t want to look like her.” At this, Shi only laughs. Even her daughter has ridiculed her body.

Training has not only changed Shi’s body, but also her lifestyle and views. After she participated in her first bodybuilding show last year, she had the idea to retire early and pursue professional bodybuilding. She said that she had been a traditional woman, helping her husband and children. Were it not for bodybuilding helping her “find herself,” now she would still be leading that kind of life. She now lives by a mantra common among female bodybuilders: “Self-love, self-discipline and self first.”

In order to maintain her physique, Shi must strictly control her diet and habits. Each day during contest prep, she eats only high-protein, low-fat foods such as chicken breast and egg whites. She spends much of her time working out at the gym and now has little time to take care of her husband the way she used to. Luckily, her family is very supportive of her, allowing her to train without worry.

Training and competitions take up much of bodybuilders’ time and effort, so it’s difficult to avoid neglecting their other commitments. Chen Liping, 37, the winner of the provincial competition who plans to compete nationally, often asks her sister to take care of her son while at competitions since her husband works long hours and frequently travels. Once the competition ends and Chen returns home, she will make lunch for her son every day.

To prepare for the national competition one week later, Chen will again have to return to her intense competition preparation regimen. That, she said, will be a long week of suffering. She wakes up at 7 a.m. and cycles with her son to school. Afterward, she climbs 32 flights of stairs six times and then goes to the gym to continue training. She feels incomparable fatigue due to the enormous calorie deficit from her training and restricted diet. Her greatest pleasure during this period is opening Douyin, the Chinese version of short-video app TikTok, to look at videos of food.

Though preparing for competitions is tough, Chen has found comfort in the successes she has seen over the last four years. In her mind, competing reveals the results of her years of discipline and perseverance.

Chen considers herself extremely lucky to have the support of her family and friends. Some of her female friends were forced to give up bodybuilding due to pressure from their families.

As the bodybuilding industry develops in China, people’s attitudes toward it are changing. But due to deeply-entrenched traditional beauty standards, many still think a woman’s body should be soft. Society is not yet accepting of female bodybuilders’ physique.

Yao Guixiang, the vice chairwoman of the Henan Province Aerobic Sports Association, was deeply moved when speaking about women’s physical fitness. “These hardships can only be understood by those who have experienced them,” Yao said. “It is not only the physical test brought by the exercise, but a test of will. Few understand or experience the hardships female bodybuilders endure.”

Cheng complained that many female bodybuilders may be using hormone supplementation to get the exaggerated muscles. He admired the women who are disciplined and courageous enough to push themselves — “they should be treated with a more tolerant attitude,” he said.