Q&A: Director Hao Wu on Coming Out in a Chinese Family 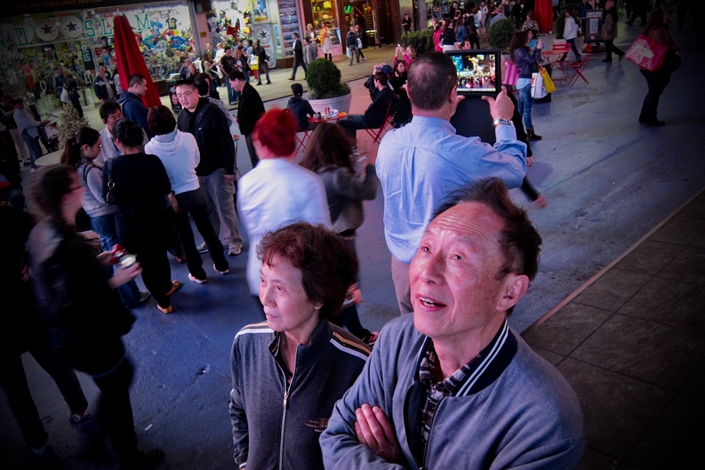 A still from Hao Wu's documentary short "All in my Family" shows Wu's parents. Photo: Netflix

“Eric, are you bothered by all of this?” director Hao Wu asks his partner, Eric, from behind the camera in his latest documentary.

“No,” Eric responds with a slight shake of his head. “I think it’s all part of being in a family.”

The scene is the crux of Wu’s Netflix documentary, “All in my Family,” which explores his coming out as gay to his family and bringing his partner and children — born via surrogacy — to meet his extended family in southern China.

Through intimate interviews with his parents, sister, and extended family, the viewers learn how Wu’s coming out affected his family, and of their traditional expectations for their only son.

The 40-minute short, filmed over a few years, features candidly raw scenes of Wu’s parents and sister. As Wu, his sister, and his cousins discuss who of their extended family members to tell about Wu’s “alternative lifestyle” — if they should be told at all — the depth of the dilemma is genuine and real. “All in my Family” exposes the collision between what is expected of Chinese children — a good job, marriage, children, conformity — and the life Wu leads with Eric in New York City.

Wu was born in Sichuan and has been making documentary films since 2005. His award-winning 2018 documentary, “People's Republic of Desire,” follows three young performers as they try to make it big on livestreaming sites that have boomed in China.

Speaking with Caixin, Wu talked about the complexities of human emotions, loving his family despite the complications, how access to information is helping today’s LGBT youth in China, and his hopes for their future. The following interview has been edited for clarity.

Caixin: Your previous films have focused on young people and social trends in China. How do you see “All in my Family” fitting in?

Hao Wu: That’s an interesting one. To some degree you can look at (Wu’s 2013 documentary) “Road to Fame” as a story of a coming of age, the one-child generation. “People’s Republic of Desire” is not exclusively a coming of age film, but it’s about young people and how they deal with what’s online and the wealth inequality in today’s China. This film to some degree is also a coming of age story, even though it was told in retrospect. I came out to my family, and then once I had a baby it was almost a second coming out, to my extended family.

I’m always attracted to the complexity of emotions around change. When external forces start to change, how the protagonists deal with those, or how or whether or the protagonist wants to instigate some change, and what the repercussions are.

Even though my films are youth driven, I would say they are more character driven. It’s really about how a character changes. So with this film, you can see the continuation of that approach as well. The difference is that obviously this is extremely, extremely personal. The other ones were observation.

Why did you decide to turn the camera on yourself?

To be honest, I never thought about this. First I started making some home videos of my parents because, as I was saying in my film, I really thought my family was so unique and so quote-unquote “crazy.” I really wanted to capture that, and maybe in the future I would use it somehow.

But it was very surprising to me, as soon as I started showing this film to Chinese friends — I did a screening in Beijing and I showed it to a few friends here in New York — everybody came up to me, most of them Chinese, and said your parents are exactly like my parents, though mine may not be as loud as yours.

One of my friends summarized it very nicely. She said that my parents are really representative of their generation in terms of the expectations they put on their kids, in terms of how they communicate with their kids, in terms of how they want to control their kids’ lives and are so blatantly meddlesome in their kids’ lives. That’s really representative of that generation because while the parents of this generation are still controlling and are still doing a lot of things Chinese parents tend to do, they’re not as in-your-face as my parents.

The second reason was when my partner and I first started to go through the surrogacy process, so many of our friends, both straight and gay, started asking questions like, how do you guys do it, what’s it like, how do you find an egg donor, how do you find a surrogate? I realized at that point, wow, people in general are not aware of this. So as a storyteller, as a filmmaker, my instinct is that there’s an interesting story here.

It was interesting to see how vehemently opposed your mother seemed to be to the idea of you and your partner having children before you had them, but when she finally met them, she was so loving and accepting.

When Netflix published the official trailer, I saw a lot of people commenting on YouTube saying this family is horrible, I sympathize with the filmmaker, how can the filmmaker live in a family like that?

It is kind of surprising to me because I think my mom, or any human being, is complex. We are rarely as one-sided as we would like to portray ourselves to be or broadcast ourselves to be. I think what’s interesting about my mom is that she is so open about it. She’s so transparent, and she’s also dramatic, so all her complexity comes out. She can be extremely loving towards me and my kids at the same time. Even to this day she still thinks our family is imperfect just because we don’t conform to the gender norms and the norms of society. But I think that I absolutely made this film partly to help myself work through the complex emotions I have towards her.

At the beginning, I viewed her just through the lens of black and white. You know, she’s evil, she’s a bad person, she’s a controlling person. And then as I aged, as I became a parent myself, I realized things are a lot more complex, and if we are truly to be able to love we have to embrace the complexity in everybody. I think this film is part of my therapy, my journey of coming to terms with that, to embrace her and embrace my quote-unquote “Chinese roots,” even though I still have a love-hate relationship with them.

I think people who understand Asian culture might understand that better. I’m anticipating some blowback in the American market.

What kind of blowback?

When we did the test screening in New York, one of my gay friends said that just as he was incredibly moved by this film, at the same time, he could see that other people would criticize me for not coming out to (the whole family) at the end of the film. I see that point. I can totally see why they think that’s not the right way to do it.

Have your parents seen the film? Did they think it was an accurate portrayal of how they feel?

They watched it. They didn’t have any objections. I guess they just felt a little bit weird seeing themselves, and that there are too many shots of my parents eating (laughs).

Obviously I edited it down, so for the audience, the arc in the characters is probably more pronounced than in real life. In real life my mom just nags constantly, saying the same thing over and over on a daily basis. I constructed some changes in her, though it is true that she changed. But I guess for her, because she’s seeing herself saying the same things she says to us all the time, I don’t think she found it shocking in any way. Some of my friends were concerned whether I’m portraying her accurately, portraying her temper and her screaming and yelling. My mom didn't have a problem because, if anything, the reality is actually more intense than what was put in the film (laughs).

Part of my intention in the film is to show how a so-called traditional Chinese family can be so divided. To me that’s very interesting. I think that might get lost on viewers.

You can clearly see how it’s easier for younger generations to accept (alternative lifestyles). Two of the characters I decided to cut out from the film are my two cousins, the daughters of my big aunt and my little aunt. They are totally cool with everything. In my mom’s generation they are divided as well. Even though I struggled with coming out myself, looking back at this film and how my family is changing gives me hope. It’s so much easier nowadays for young people to accept alternative lifestyles or alternative family structures.

Why did you decide to make it a short film?

I think the primary reason was I was (acting) too much like a filmmaker rather than a parent.

The interviews talking with my parents were really nice because if I didn’t sit down with them and interview them, we would never get a chance to really talk in-depth how we feel. So that part was really nice. But then once my kids were born, I was torn between, am I a filmmaker or am I parent? If I wanted to make a feature-length (film) then I’d need to capture a lot more as the kids grow up, so I’d need to film a lot more.

Secondly, (my partner and I) both feel uncomfortable having too much of our kids as they grow up in the film, because that’s invading their privacy. So that’s why I decided to end it where it was, to make it into a short.

How are things different for LGBTQ kids in China growing up today? Do you think they’ll have similar struggles to the ones you’ve had?

I think the struggle is going to be the same. The major difference is access to information. When I was coming out in China there was no information. I remember, in 1988 or 1989, there was a newspaper report on domestic partnerships in Hawaii, I think. I don’t even remember — it was about two men living together. That’s the gist of the exposure I had growing up to gay people in the news media. The only books we could find were on psychology, as I mention in the film, in which homosexuality was a mental illness. That’s the only thing we had. Nowadays, kids have so much access to information.

But the main struggle with their parents, with social expectations, what’s normal, what’s abnormal, is still similar, especially for parental or family pressure. I talk to young people today, and they still struggle with this in a major way. I think one of the reasons is because older people are not being exposed to positive LGBT figures in mainstream media. Even today it is very rarely discussed.

In China today, within the LGBT community, there’s a lot more mutual support than before. People are coming out to each other, to their close friends, and some of them even come out in the workplace. But there’s still a big divide in terms of how members of the LGBT community interact with their friends and with their family back home.

But I think we’re on the right track. I think this society is changing. It’s definitely changing.