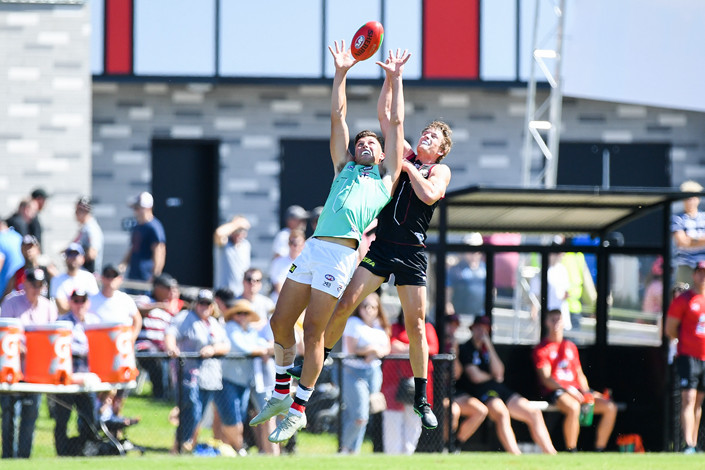 Rowan Marshall of St Kilda Football Club leaps for the ball at a game in Melbourne, Australia on Feb. 23. The team will play an exhibition match against Port Adelaide in Shanghai on Sunday. IC Photo

(AFR) — There's no talk of trade wars or diplomatic tensions on the footy field at Yanhe Middle School in suburban Shanghai. Instead, coaches are putting two teams of 13-year-olds through their paces.

The enthusiastic group is learning how to kick and pass an oval-shaped ball familiar to most Australians, but which is an oddity in China.

“Look down, look at the ball,” their coach yells. “Try and catch the ball in your chest.”

It is rare to see kids playing Australian rules football — or “Aussie Rules” — in any country outside of Australia, let alone China. But the sport has been introduced in 23 schools across the country, where basketball and soccer — President Xi Jinping's favourite sport — are more common.

“It’s cool,” Tom Zhang, 13, says when asked what he thinks of Aussie Rules. “I used to play American football but it seems a bit violent. My friend got injured. Australian football is much safer.”

The decision to teach Chinese kids how to play it is part of a wider program spearheaded by the Port Adelaide Football Club to introduce the game to the world's most populous country. What started out as a wacky idea to host an annual Aussie Rules game in Shanghai is now in its third year, with Port Adelaide to play St Kilda on Sunday.

While there has been some skepticism around the push to introduce Aussie Rules in China, Port Adelaide has secured a three-year agreement with St Kilda to play annually in Shanghai, and a “festival” to promote Australian products, culture and business in China has sprung up around it.

Organizers see sport helping to offset the deterioration in diplomatic relations between China and Australia, inflamed by Donald Trump's trade war and security tensions over Huawei.

“There is no doubting the challenges operating in China at present but we've made significant progress this year,” Port Adelaide chief executive Keith Thomas said.

“Longevity in China means a lot, and up until now we have only been able to operate on a year-by-year basis. We believe this game is establishing itself as a pivotal opportunity for Australian and Chinese businesses to come together.”

While there are benefits in promoting cultural ties between the two countries, money was the main driver. Port Adelaide turned to China for sponsorship dollars three years after struggling to compete with their high-profile Victorian rivals.

Its key sponsor, property developer Shanghai CRED, has helped it establish a joint venture in China aimed at helping Australian and Chinese companies do business in each other's countries. It has also launched the Power Footy program in Chinese schools in 2016.

The annual game in Shanghai could also be the unlikely setting for the government of Prime Minister Scott Morrison to have its first official contact with China since the Australian election this month. Organizers with the AFL — Australia’s top professional Aussie Rules competition and the governing body for the sport — are hopeful a minister from Morrison’s new cabinet, possibly Trade Minister Simon Birmingham, will make it, although timing makes it tricky.

The AFL confirmed last week it would establish an office in Shanghai to look at business opportunities. St Kilda replaces the Gold Coast, which played in the two inaugural games, for the next three years.

The Victorian government, which has broken ranks with Canberra to pursue business opportunities in China, is this week taking a business delegation to China, which includes Seek chief executive Andrew Bassett and the state Minister for Trade Martin Pakula.

With 4000 Australians expected to travel to China for the game and a support team of more than 100 for Port Adelaide alone, Thomas admitted it had not all been smooth sailing.

“It [political tension] has created a degree of caution between people who are interacting at a business level with China. Both sides, everyone, has been a little uneasy about how that relationship is playing out. But there is also a degree of pragmatism and we are all continuing to do business with each other," he said.

Back on the school footy field, Senna Blackborough — an Australian coach working full-time in China — says his students are rapidly picking up the game.

“Sport is not so much part of popular culture here but they are learning quickly. It's great to be able to teach kids about Australian culture through football,” he said.