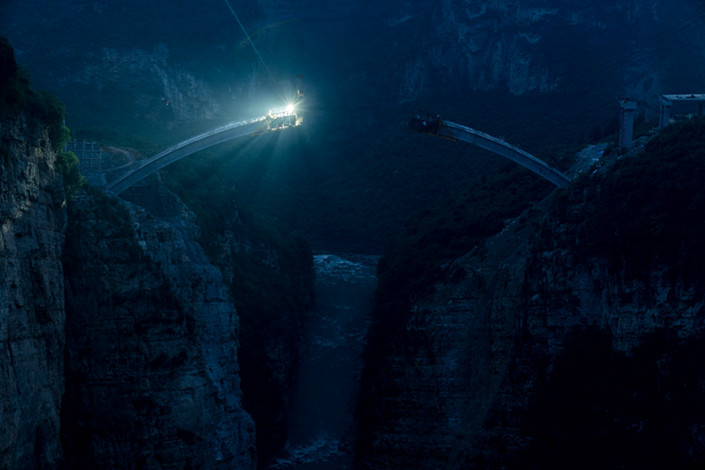 The bright lights from the construction site of the Jiming Three Provinces Bridge cut through the fog on May 16. It is expected that the bridge, scheduled to open later this year, will reduce the time it takes to travel between the Sichuan and Yunnan towns on either side of the bridge from two hours to two minutes. Photo: Chen Liang/Caixin

Between the steep walls of the canyon formed by the Chishui River, the arches of an enormous bridge under construction loom high.

The Jiming Three Provinces Bridge is located where Sichuan, Yunnan and Guizhou provinces all meet and will link three towns in each province. Once the bridge is completed later this year, crossing the Chishui River gorge will take two minutes, instead of the over two hours needed now.

The bridge is being built on the cliffs of the Chishui River Gorge, 180 meters (590 feet) above the river’s surface.

This month, workers dangled mid-air at the edge of the arch ring, strapping steel bars and pouring cement. The crane operators, a married couple, are at the highest point of the construction site every day — 256 meters above the water.

Zhang Chunhua’s husband began teaching her how to use the crane when she was 30 years old. The first time she climbed up behind him, the tower of the crane shook. She was too frightened to move. Now, she looks at the 256-meter drop each day and is no longer afraid — she’s numb. She operates the crane on the Yunnan side of the bridge, while her husband Chen Shijun works on the Sichuan side.

Every day, she travels to the Yunnan side of the Chishui River in a suspended cable car welded from iron sheets and steel bars. There are no seats and it rattles as it starts moving. It takes about 20 minutes to cross the 310-meter span. The first person to ride in this hanging cage, a clerk from Sichuan, called the construction site’s foreman to make sure it was safe. Later, he took comfort telling himself that if the cage did fall, the drop wouldn’t last long.

Jiming — where the three provinces meet — has long been a dead end for traffic. According to project manager Jiang Zhongqiao, the building materials and equipment needed for the construction were transferred here from afar. During the winter, no truck driver dares navigate the icy mountain roads.

Because the construction site is so remote, workers seldom return to their hometowns.

After work, the main task for the workers is to kill time. Zhang transformed big, empty Sprite bottles and plastic laundry detergent bottles into flowerpots. She dug wild lilies from the hill and planted them near one of the sheds. In May, she checked them every day to see if they had bloomed.

Going for walks is another way to kill time. Each day after dinner, the women workers go walking for more than an hour, sometimes walking 10,000 or 20,000 steps. At first, the stray dogs from the construction site would follow them, but now the dogs stay to watch the men play table tennis or lie down at the edge of the cliff.

The office in charge of construction of the Jiming Bridge is located in Shuibei, a small Sichuan township dominated by the Yi minority that is also known for its plum trees. Twenty years ago, during plum season, every household in Shuibei township would carry plums across the river to Yunnan to sell in nearby villages.

Back then, in order to sell his plums at a good price, Li Dequan would leave two days ahead of schedule to make it to Zhenxiong county. On his back he would carry a basket of plums weighing 40 to 50 kilograms. He would be drenched in sweat as he carried it down the mountain. After crossing the river by ferry, he would climb back up the mountain on the other side, sleeping on the roadside over the two-day journey. After finally reaching the county towns, he could sell the plums for 0.5 yuan per kilo and return with a bag of potatoes or corn. Now, hardly anyone carries plums over the mountains to sell.

Xiong Wei, the town’s party secretary, said that Shuibei’s terrain and temperature is perfectly suited for growing fruit. However, transportation issues have restricted economic development in the area, because plums can be sold at a higher price further away.

The final segments of the bridge are expected to be joined this July, and the bridge will be open to traffic by the end of the year.

Once the bridge is completed, Li plans to take a trip to Zhenxiong county in Yunnan, where he used to sell his plums, to see how it has changed.

Another villager Xiong Weizheng, plans to open a fruit processing plant. He believes that once the bridge is open to traffic, the plums can be processed and sold to other places, allowing the village’s fruit industry to grow. Then the young and middle-aged people who left to find work elsewhere can return.