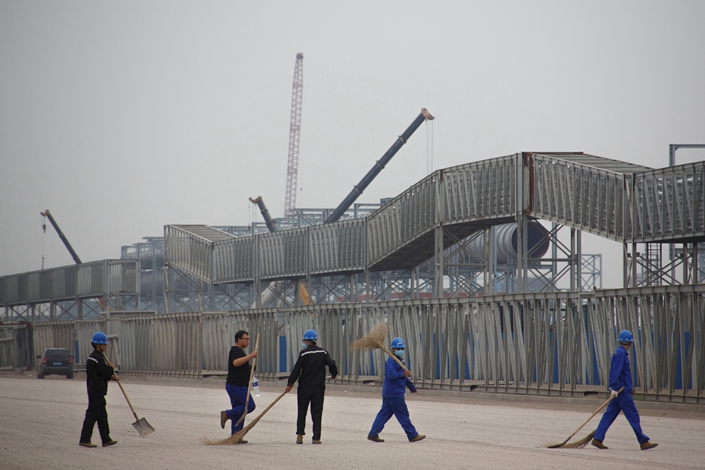 A spat between central and local government authorities over steel production and pollution targets highlights the difficulty of enacting environmental policy in China.

The Chinese steel capital of Tangshan has been shirking production caps and restrictions, an internal document from the Ministry of Ecology and Environment (MEE) obtained by Caixin claims. The city, however, disputes this.

Tangshan, which accounts for 12% of China’s steel production capacity and 14% of total output, is accused of allowing its factories to operate through winter to avoid economic losses under the false premise of providing central heating to local residents — in breach of central government environmental protection policies.

That doubling in the number of companies suggested something was amiss.

“These enterprises with such large emissions have evaded production caps, greatly reducing the response to the city’s heavy pollution and making it difficult for society to meet national emission reduction requirements.”

Steel plants can double as heating providers by running water over the hot slag produced during the steelmaking process — water that is then pumped into homes.

The exemptions were to expire at the end of the heating season, which runs from November through March, and exempted mills are expected to comply with the required winter capacity cuts at this time.

But a Tangshan Municipal Government official who did not want to be named disputed the number of enterprises that received exemptions in both seasons.

They told Caixin that 18 of the city’s steel companies were given exemptions during the heating season of 2017-18, but less than half of the 13 that applied for exemptions or higher production caps for the 2018-19 were approved, a two thirds decrease.

The official said in autumn and winter of 2017, Tangshan approved looser production restrictions or exemptions for 7 or 8 steel enterprises to supplement central heating, but the MEE “rejected this, believing that enterprises use heating as an excuse to continue operating at peak production.” But the MEE approved more exemptions in January 2018 in order to provide more heating, leading to a total of 18 enterprises that received some kind of break.

The head of a steel enterprise in Tangshan told Caixin the company began supplying heating for nearby residential areas in 2018. Previously, he said, the area relied on geothermal wells for heating, which he claimed were less stable. Hebei province has also been criticized by a central government environment inspection group for its failure to rectify illegal exploitation of geothermal resources, finding issues with various permits and polluted wastewater.

The MEE did not respond to Caixin’s requests for comment. Officials from the Tangshan environmental protection bureau and the Tangshan propaganda department declined interviews with Caixin.