By Mo Yelin and Liu Yukun 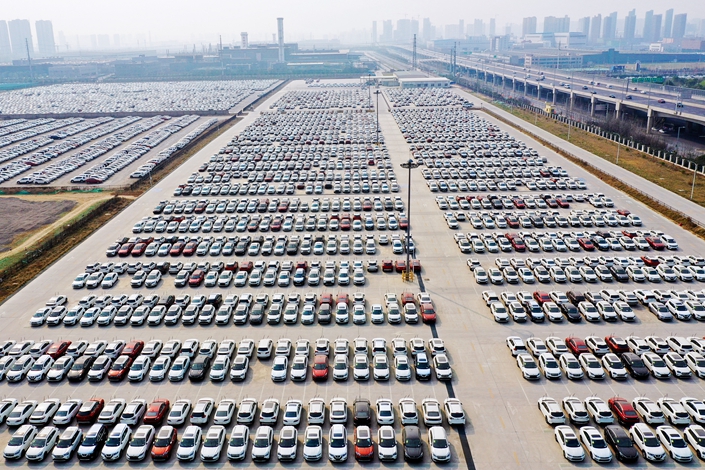 China’s auto dealerships still have millions of cars to sell this month if they want to clear inventories before a tough new emissions standard for new vehicles takes effect in July.

As many as 3 million cars that do not comply with China’s State VI vehicle emissions standard are sitting on dealer lots across the country, according to China Automobile Dealers Association (CADA).

That amounts to an estimated 500 billion ($72 billion) yuan in inventory value that dealerships must unload before the new standard takes effect and makes it illegal to sell them, according to a report the industry group released last week.

The unsold inventories of vehicles that only meet State V emissions standard are so large that as many as two-thirds of China’s dealerships believe they won’t be able to sell all of them before next month’s deadline, according to a survey published last week by China Auto Dealers Chamber of Commerce.

To make matters worse, many dealerships are locked in long-term contracts with automakers that force them to continue to buy vehicles that do not meet the updated standard.

Initially, the standard wasn’t scheduled to take effect until July 2020. However, policymakers last year advanced the implementation date in an effort to clean up air pollution in response to increasing public concern about the environment. A total of 15 provincial-level regions said they would meet the deadline, according to the CADA.

The inventory buildup is the latest blow to an auto industry still smarting from an ongoing slump in sales, April being the 11th straight month of sales declines. Passenger car sales dropped 6% to 22.7 million last year, the first annual drop in sales in more than two decades.

And as total sales fell last year, dealerships were earning less off each vehicle. In 2018, the average gross margin on new vehicle sales slipped to 0.4% from 5.5% the previous year, according to CADA.

Automakers have found it difficult to produce cars that meet the latest emission standard. As of April, vehicles that complied with the State VI standard accounted for 20% of total products offered at joint ventures that sell foreign brands, said Cui Dongshu, general secretary of China Passenger Car Association. For domestic automakers, the figure was just 5%.

Over the past week, the CADA has asked government bodies like the National Development and Reform Commission to allow a “transition period” for the industry to better prepare to meet the State VI standard.

The industry group has also asked the government for relief, such as by relieving dealerships of their obligation to buy unsellable vehicles from automakers.

In response, the Ministry of Ecology and Environment said it would explore how to resolve concerns about excess inventories. Some local governments have acted unilaterally to weaken the policy’s implementation.

For example, in North China’s Henan province, the government said it would give buyers of State V vehicles a one-month grace period after July 1 to register the car and get a license plate.