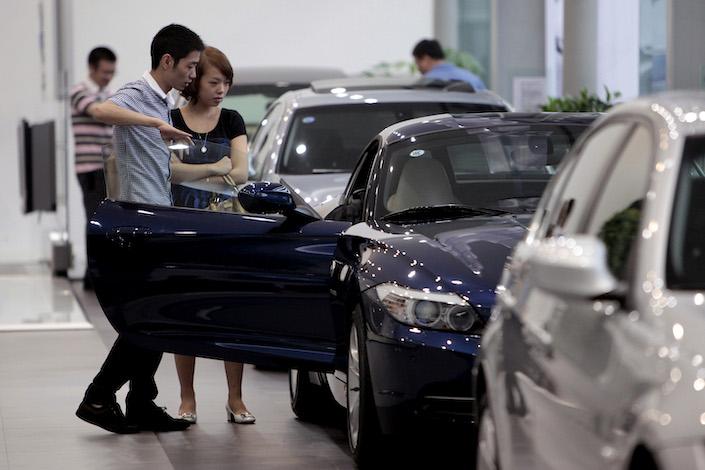 (Bloomberg) — China unveiled a stimulus plan to help spur demand for automobiles and electronics as escalating tensions with the U.S. threaten to hurt the world’s second-biggest economy.

The policies announced Thursday don’t include any new spending from the central government but encourage local governments to provide “support” if they have the capacity. Local governments will be banned from placing any new restrictions on car purchases or limits on using new-energy vehicles, according to a statement on the National Development and Reform Commission‘s website.

China is trying to buck up the economy as growth slows because of the effects of weak domestic demand and a worsening dispute with the U.S., the largest export market. The government is constrained in how much money it can offer after announcing large tax cuts earlier in the year, which may be a factor in why the announcement was less generous and expansive than in a leaked earlier draft.

“The measures may not be enough to reverse the slowdown in consumption growth” as the lack of compulsory spending could weaken implementation, said Xia Le, Hong Kong-based chief Asia economist at Banco Bilbao Vizcaya Argentaria SA. The authorities have been keeping stimulus targeted so far because they don’t want to put pressure on the currency or trigger debt-related risks, he said.

Consumption-support policies by themselves won’t be enough to lift domestic demand — the government needs to ease uncertainties about economic growth and incomes to effectively stimulate people’s spending, Xia said.

“The market has been waiting for the stimulus policy, and now it is like the boots have finally landed on the ground,” said Xu Haidong, assistant secretary general of China Association of Automobile Manufacturers. Even though there is no direct financial support from the central government, this points in the right direction for local governments to follow and stimulate consumption, he said.

To remove barriers to auto consumption, the policy urged local governments to focus on guiding car usage based on considerations such as pollution and congestion, on top of the ban on any new restrictions. Local authorities should also be supportive of families when they make first-time car purchases, the NDRC said.

China’s auto sales have plunged for the past 11 months, with carmakers calling for the government to help.

The NDRC is “focusing on auto, home appliances and consumer electronics to cement the trend of upgrading in those industries,” according to the statement. It aims to “form a stronger domestic market to realize high-quality development.”

The government will promote the next-generation 5G mobile phones, encourage research and development into smart household products using artificial intelligence and the Internet of Things, and push consumers to upgrade their appliances and discard energy-inefficient products. Appliance makers are also encouraged to enhance collaboration with real estate developers.

The “policy is generally in line with the previous government stance to encourage domestic consumption and energy efficiency of home appliances,” said Robin Yuen, an analyst at UOB Kay Hian, in a note Thursday.

China’s home appliance manufacturers such as Gree Electric Appliances Inc. of Zhuhai and Midea Group Co. have faced challenges with fierce competition in the sector and the country’s stagnant property market growth. Domestic sales in the industry grew 1% in 2018, easing from previous years, according to Midea’s annual report.

Revenue weakness for China’s appliance makers has typically followed a slowdown in residential property sales, Bloomberg Intelligence analysts said in May. The new policy trend toward loosening could support sales of appliances in 2020 and beyond, they said.