Photos and text by Niu Guozheng 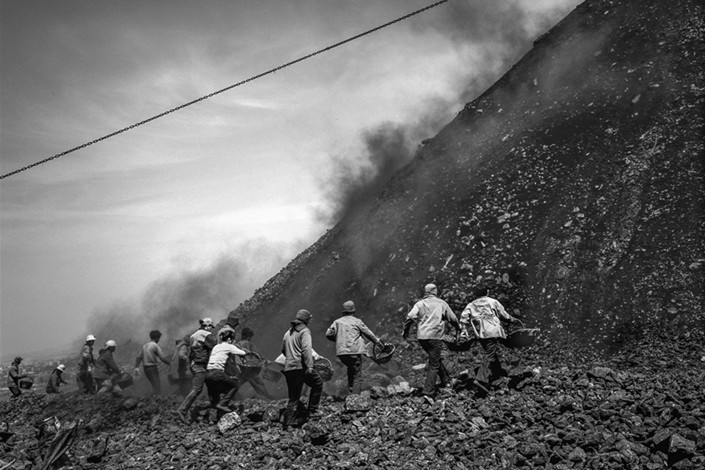 February 2007, Pingdingshan, Henan province: Without waiting for the pile to settle, collectors rush towards the gangue hill, ignoring the risks of falling debris.

Pingdingshan City is a large coal industry base located in the Central Plains of China’s Henan province. For many years, coal gangue — the by-product of coal mines and production — has accumulated into more than ten gangue hills. Nearby villagers and migrant workers make money by picking the coal out of the gangue hills to support their families or subsidize their livelihoods.

Collecting coal is a dirty, tiresome, and dangerous business. Wastewater from coal dust and gangue mix with perspiration and the collectors get covered in dirt. When picking up coal, they must be on guard against rubbish tumbling down the hills. It could injure or even kill them. In order to grab the coal, the collectors rush up without waiting for all the gangue to settle. Sometimes, they are injured by the gangue.

The spontaneous combustion of coal gangue not only releases a lot of heat, but also gases such as carbon monoxide, leaving the collectors short of breath. Some of the gangue piles are also unstable and at risk of collapse. In 2005, four gangue piles collapsed, causing eight deaths, burning more than 100 people from the heat waves, and destroying more than 40 houses. And yet, many people still dare to venture onto the gangue hills to earn tens of yuan per day.

As the gangue hills continue to grow, the residents nearby suffer. Some houses have been destroyed by debris from the hills. The dust has affected the harvest of crops and impacted the villagers’ incomes. The waste piles make many of the villagers feel depressed.

In recent years, what used to be an annoyance has become more valued due to increasing government efforts to improve the environment. Some have taken advantage of the rising coal prices, mixing gangue with raw coal and selling it. Since 2005, many coal mines have been exploiting the gangue hills, using them to produce hollow bricks and other products. Many of the waste dumps no longer exist and have faded from memory.

These photos tracked and captured the lives around the mining area and the gangue hills between 1998-2009.