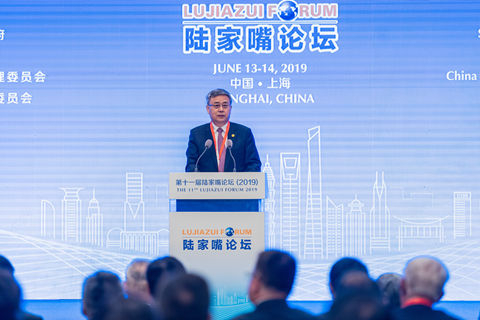 The head of China’s banking regulator said interbank liquidity was somewhat affected by the recent government takeover of a troubled private bank, but now the situation is improving.

Guo Shuqing, chairman of the China Banking and Insurance Regulatory Commission (CBIRC) and party chief of the central bank, made the comments to Caixin reporters Thursday on the sidelines of the Lujiazui Forum, an annual gathering of senior financial regulators, experts and market participants.

The bank relied heavily on the interbank market, where banks borrow from each other, using funds so raised to bolster liquidity, which allowed it to leverage up.

The takeover dampened the market for interbank certificates of deposit (CDs). Actual issuance of such CDs declined to less than half of the issuers’ planned borrowing in the few days after the takeover on May 24. Issuance has since recovered to about 60% of planned volume but is still significantly lower than the 85% rate before the Baoshang takeover, data from China International Capital Corp. (CICC) showed.