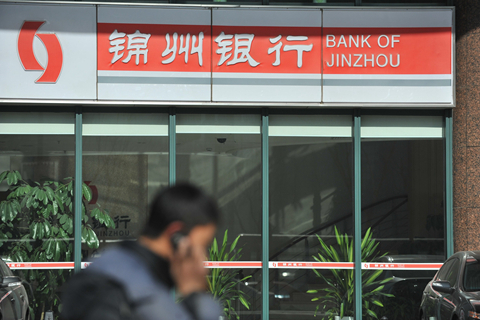 Jinzhou bank’s CDs will be the first interbank CDs issued under the CRMW initiative. Photo: VCG

With the market for interbank certificates of deposit (CDs) dampened by the recent government seizure of a troubled private bank, China’s central bank is backing CDs issued by another troubled lender to calm market jitters.

Bank of Jinzhou, a small bank based in China’s northeastern Liaoning province, divulged a plan Monday to issue 2 billion yuan ($289 million) of six-month CDs Wednesday at a yield of 3.21%, in line with the market average, according to a senior interbank market participant.

The CDs will be guaranteed by the People’s Bank of China (PBOC) through a financing support tool called a Credit Risk Mitigation Warrant (CRMW). If Bank of Jinzhou fails to redeem the CDs in full at the expiration date, China Bond Insurance Co., a state-owned credit insurance provider backed by the central bank, will make up the balance, the bank said Monday in a statement.

The PBOC introduced the CRMW tool last October to support bond issuance by private enterprises amid record defaults of cooperate bonds. Many companies have taken advantage of the tool. But the Jinzhou bank’s CDs will be the first interbank CDs issued under the CRMW initiative.

Interbank CDs are popular short-term debt instruments used by smaller lenders because of their cheap cost relative to issuing longer-term debt. Their issuance has slowed since late May, when the China Banking and Insurance Regulatory Commission took control of Baoshang Bank, a small Inner Mongolia lender that relies heavily on such CDs.

The first government seizure of a private bank in 20 years raised speculation that it may foreshadow the takeover of other smaller lenders. The central bank has assured that the Baoshang takeover is an isolated case and not indicative of a policy shift. Its seizure by the authorities was linked to the embezzlement of funds by its controlling shareholder, financial conglomerate Tomorrow Holding, the PBOC said.

The PBOC has since issued several official statements to ease concerns in the interbank market about the overall health of smaller banks. The central bank has pledged to use multiple monetary policy tools to provide liquidity support to small and medium-sized banks.

But the issuance of interbank CDs has clearly felt a chill. Actual issuance totaled 65% of the issuers’ planned borrowing as of Monday. That represented a slight recovery from the lowest level two week ago but was still significantly lower than the 85% rate before the Baoshang takeover, data from China International Capital Corp. (CICC) showed.

Hong Kong-listed Bank of Jinzhou is among the banks that were hardest hit. The bank hasn’t issued any new CDs since May 28. It has issued 48.6 billion yuan of CDs so far this year, compared with a planned issuance of 90 billion yuan for the whole year.

But the resignation of bank auditor Ernst & Young before signing off on the 2018 financial report suggested those numbers might not be accurate. Ernst & Young said in its resignation letter there are indications that some loans to institutional customers weren’t used in ways consistent with the purposes stated in documents, Bank of Jinzhou said in a statement.

Trading in the bank’s Hong Kong shares has been suspended since April 1 after the bank twice delayed publication of its 2018 annual report.

The Jinzhou government holds a 4.27% stake in the bank. A person close to the regulators told Caixin that the local government is considering an equity injection into the bank. Caixin hasn’t been able to reach the Jinzhou Municipal Finance Bureau for confirmation.