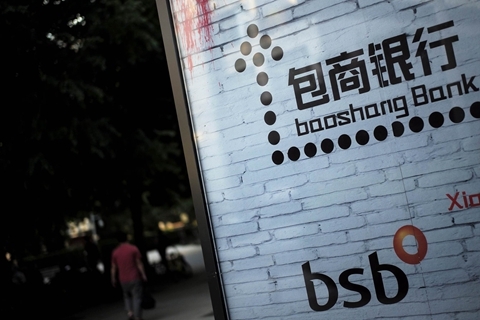 Baoshang’s net profits slumped by 13.9% year-on-year to 3.1 billion yuan in the third quarter of 2017, the last time it disclosed financial data. Photo: VCG

The People’s Bank of China (PBOC) and China Banking and Insurance Regulatory Commission (CBIRC) announced Friday the takeover of Baoshang Bank Co. for a year.

The regulators said the takeover reflects the “severe credit risk” the bank poses and is intended to protect the interests of the bank’s depositors and other clients.

China Construction Bank (CCB) will be entrusted to handle the business operations of Baoshang Bank while under state control. Principle and interest on personal saving accounts in the bank will be fully guaranteed, and all business will continue to operate normally, the CBIRC said Friday in a separate statement.

Zhou Xuedong, chair of the PBOC’s general office, and Li Guorong, the deputy head of the CBIRC’s commercial bank department, will lead the takeover team.

Li previously led the regulatory team that oversaw the restructuring in Chengdu Rural Commercial Bank in 2018, when its parent Anbang Insurance Group Co. was seized by the government after founder and former Chairman Wu Xiaohui came under investigation for fraud and embezzlement.

Baoshang is a key piece of Xiao’s sprawling business empire. Even though it’s a small, lesser-known lender based in the industrial city of Baotou in the Inner Mongolia Autonomous Region, the bank is considered to have a particularly close relationship with Tomorrow Holdings.

The source said Baoshang Bank helped Tomorrow Holdings put together at least 150 billion yuan of funding through shadowy practices, including loans packaged as wealth management products, interbank lending that eventually went to the group’s subsidiaries, and funding obtained by using the group’s stake in Baoshang Bank as collateral.

After Xiao came under investigation, Baoshan Bank Chairman Li Zhenxi remained out of China for a while before returning to cooperate with the investigation, Caixin learned.

Last June, Tomorrow Holdings tried to sell around half of its stake in Baoshang Bank to Shenzhen Investment Holdings Co., an arm of the city’s state-owned assets supervision and administration commission. But the deal, which was then valued at more than 18 billion yuan ($2.8 billion) based on the bank’s market capitalization, didn’t go through.

Sources told Caixin that the Baotou government and China Huarong Asset Management Co. were also interested in acquiring the lender, but talks failed to reach an agreement.

The bank’s asset quality and business operations have deteriorated sharply in recent years. The lender’s net profits slumped by 13.9% year-on-year to 3.2 billion yuan in the first three quarters of 2017, according to its financial report. It had 576.2 billion yuan in assets and 543.7 billion yuan in liabilities as of the end of September 2017.